Now is an urgent moment for conversations about American identity and the ongoing role of racism in our culture. This fall, Lisa Sette Gallery will exhibit works that present a new scholarship of American identity, a matrix formed by our disparate human narratives and our shared human experience. Textile and social practice artist Sonya Clark tests the interactions between elementary human materials—textiles and text, storytelling and visual symbols such as flags and currency, beads and human hair—as a method of revealing our national history and collective character.

Any examination of American identity must address the legacy of slavery and the ensuing, ongoing mistreatment of African and African-American bodies. Clark’s Slave Collar series is an unflinching look at slavery and its historical origins: words that encapsulate the practice of dehumanization and slavery are inscribed in a series of punctures through handmade 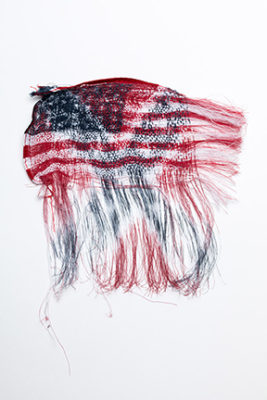 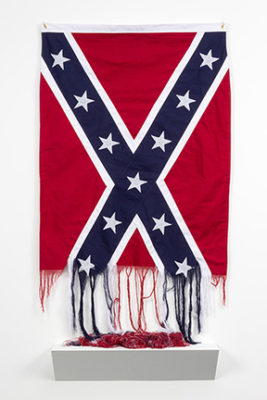 Clark explains that these haunting works, “are based on the parallel legacies of Empire building through slave labor in the Roman Empire and in the USA. Many of the enslavement practices of ancient Rome were employed in the Americas, including things like slave collars.”

With a methodical approach and clarity of purpose, Clark’s works manifest the exchange of stories and skills that are fundamental to human connection across time. The deconstructed flags of Clark’s renowned Unraveling project resulted from hours of work alongside volunteers from the public, who shared their reflections and their labor to mark the 150th anniversary of the end of the Civil War by unweaving the threads of a tightly woven Confederate battle flag.

A continuation of this project, Interwoven presents the deconstructed fibers of the current US flag interwoven with the deconstructed flag of the Confederacy. The result is eerily not one thing nor the other; a shadow image reminding us of the difficulty of separating out the strands. “It’s not really about an oppositional relationship,” remarks Clark, “But instead to try and discern the complexity of the symbol, the complexity of the history, and work—or unwork—it together.”

Community and craft as an iterative function of the American experience is integral to Clark’s experience as a first-generation immigrant. Her story encompasses a vast breadth of identities that exemplify a resident of the American continents—raised in Washington DC by a Jamaican mother and father from Trinidad and Barbados, Clark’s distant ancestors had in turn, survived the carriage from West Africa on a slaver’s ship. A Scottish great-grandfather connected the family to Europe, and these days Clark travels widely among these diasporic branches of her family: to Europe and the Caribbean, Africa and the US. It is a family story with a unique vantage on the notion of American identity: forged through slavery, immigration, love, and an intergenerational linking of cultures.

In our family stories, Clark says, “the most personal becomes universal,” and at the present moment of our American story, this rendering from the personal to the universal feels particularly urgent. For Clark’s part, addressing the violence and iniquities borne by African-Americans in our society is only the first sentence in the story.

“Anger is justified, and then what? Because anger is simply an emotion. I’m much more interested in what happens next. How do we move forward? And how far have we moved forward?” 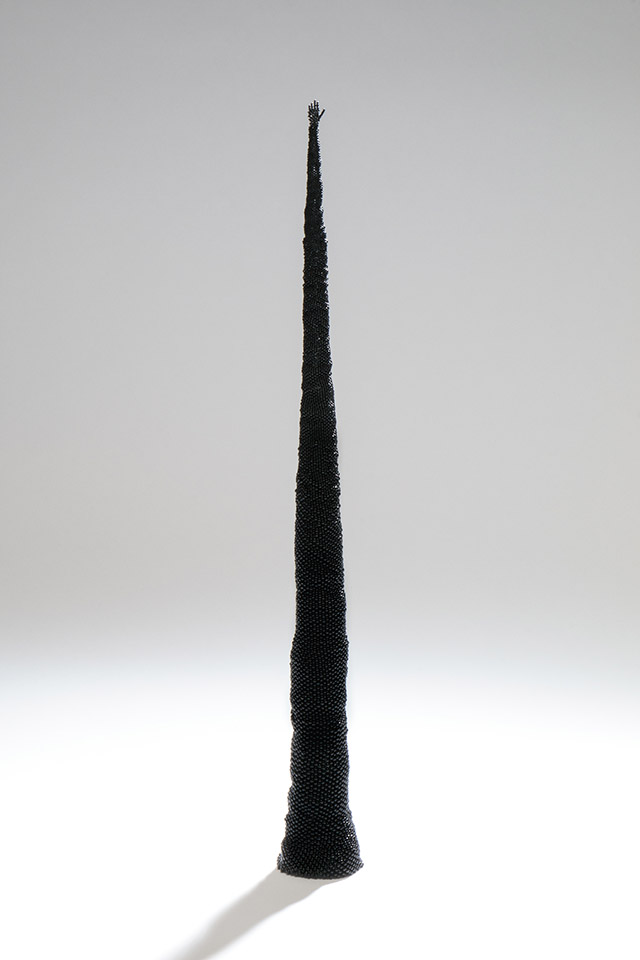 To request high resolution images, please contact us at (480) 990-7342 or email Ashley Rice Anderson at sette@lisasettegallery.com.

For over three trailblazing decades, Lisa Sette has remained committed to discovering and exposing original, intriguing forms of expression. Lisa Sette Gallery exhibits painting, sculpture, photography, video, installation and performance pieces from an impressive roster of emerging and established artists, as well as maintaining a clientele of local and international collectors devoted to its founder’s adventurous curatorial vision.