One lucky social media follower of NU Hotel Brooklyn will get the opportunity to be a hero, just for two days. The hotel recently unveiled a new in-room David Bowie-inspired mural as the latest addition to its NU Perspective mural program and is now offering a two-night stay and VIP tickets to the exhibit to one lucky guest in its Hero Giveaway, open for entry through May 31, 2018.

Designed by local artist John Fisk, the mural ‘Heroes’ was inspired by the current David Bowie is exhibit at 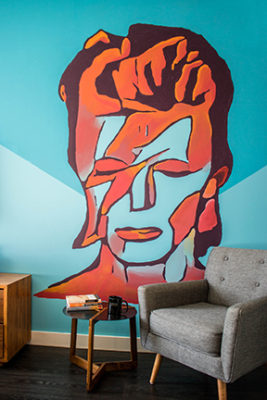 NU Hotel is the preferred hotel and official sponsor of the groundbreaking exhibit at Brooklyn Museum which runs through July 15, 2018.

“David Bowie is at Brooklyn Museum has invigorated the city with Bowie fervor —  from music tributes, photography takeovers on the subway, themed gallery installations, costume parties, and film festivals–NU Hotel couldn’t help but get swept away with Bowie fever,” said Gary DeSoiza, general manager of NU Hotel.  “Through the installation of the Bowie mural and partnership with Brooklyn Museum, NU Hotel is thrilled to be able to pay homage to the legendary musician while supporting our local Brooklyn artists.”

The NU Perspective Program, launched in 2012, gives creative license to local artists to liven up the walls of 16 of the hotel’s 93 guestrooms.  The hotel’s loft-like accommodations with crisp white walls are an ideal canvas for local artists to display their talent.  The latest mural created by Brooklyn-based artist and designer, and longtime Bowie fan, John Fisk, features a larger-than-life mural of Bowie in a king guestroom. The mural depicts a bust of Bowie brought to life with bright pops of orange, red and deep purple on a soothing aqua backdrop.  Known for his work as a logo designer, Fisk’s designs have been featured in Graphis Book 5, Really Good Logos Explained and Creativity 36.  An active member of the Brooklyn art collective, Gowanus Swim Society, Fisk has been showing his work locally for the last few years.

There will be an opening party for the Hero mural, along with two other recently completed murals in the NU Perspectives program.  The other murals include a Truman Capote-inspired mural by Lisa Warren, which features vignettes from Breakfast at Tiffany and Capote’s life in Brooklyn, and Hyun Jung Ahn’s mural ‘Forever Young: My Brooklyn’, a landscape with bold colors, clean lines, shapes and forms.   The reception will be held on Thursday, June 7, 2018 from 6-9PM.  The reception is open to the public, but RSVP is required. RSVPs can be made via Eventbrite: (https://nuperspectivemuralparty.eventbrite.com)