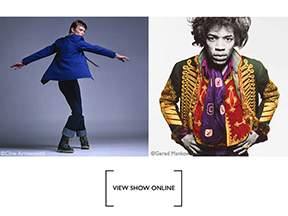 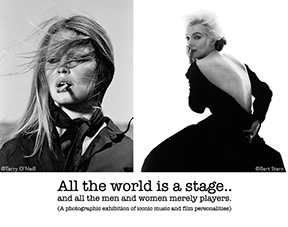 Photography has a close and inextricable relationship with music and film, capturing defining moments in culture and fixing them forever in our memories. The relationship between photography, music, and film shape how we remember culture and our position in it. Early Rock and Roll photography has created indelible images of cultural actors that brought out the rebel in the viewer. The music needed images to portray the freedom and personal liberation that its sound conveyed. For film, the freeze-frame reignited the imagination of the viewer, and allowed for the characters to become familiar and also something greater, to become iconic.

“Rock and roll has a handmaiden, and her name is photography. The music alone cannot convey the rebellion, liberation, ecstasy, and group dynamic that is rock. The music needs images to communicate its message of freedom and personal reinvention. After the music stoops, the still image remains, a conduit for the electricity that is rock and roll.” Gail Buckland – “Who Shot Rock & Roll”

One could argue that screen and stage stars have been mythologized in a similar fashion. Sound and movement are fleeting and ever changing – the photographic image is ‘fixed’ and remains unchanged. In this exhibition, the photographers Terry O’Neill, Clive Arrowsmith, Harry Benson, Gered Mankowitz, Bert Stern, Roy Schatt, Arthur Elgort, and Norman Seeff have helped to mold and capture the rebellious, raw counter-cultural rock and roll icon aesthetic. The portraits of Mick Jagger, Keith Richards and Jimi Hendrix by Gered Mankowitz portrayed the individualism and energy of music at the time. The images visual support the energy, attitude and character of their music. The “mean, moody, and sexy” persona begins to take shape and will cement the iconic classic Rock and Roll hero pose. Bert Stern’s photographs of Marilyn Monroe and Elizabeth Taylor seduce the viewer into seeing more than the mere glamour of their public face. They are seen as somewhat vulnerable and unknowable. Roy Schatt’s portraits of James Dean are penetrating in their candid and almost intimate nature. Opposite this – Harry Benson’s legendary “Pillow Fight” is an example of a completely exuberant image that is bursting with so much energy that it is hard to contain within the margins of the frame.

Photography that addresses music and screen images has the power to stop time. Whenever the exposure was made – this is how we remember the subjects. As legends grow old and change or are no longer alive – the photographs will always point to a life and to a persistence of memory. We have the joy of connecting with a performer or a place in our personal and collective psyche that have a special meaning and the visual skill of these great photographers conjure up emotions and feelings that engage far more than our eyes. The photographs in this exhibition become a “living stage” that nourish our spirit and senses.