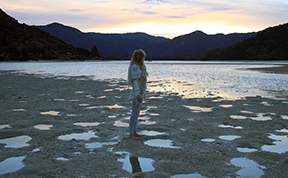 Working variously across film, video, performance, photography, and sound, Amie Siegel (Chicago, IL, 1974) exposes and connects multiple strata of meaning in her meticulously crafted installations. While narratives operate as sites, artifacts and documents emerge as material tokens of memory, desire, and fact, confronting film with the circumstances and protocols of its own making. The large-scale video installation Winter (2013) results from the artist’s ongoing reflection on the relationships of sound and image in film production and post-production. Exemplifying Siegel’s approach to open form, Winter stands as one of the artist’s most radical works to date.

Siegel collaborates with local performers for each exhibition of Winter, interrogating the work’s relation to its locus and resituating the viewing within a nomadic production set. Each loop of the absorbing, post-apocalyptic film is thus reinterpreted through a shifting soundtrack produced live, where voice-over, sound effects, and music provide a different living score for each half-hour iteration of the film. Successively doubled, rather than dubbed, Winter alerts us to the fluid state of the filmic image as sound scripts modify the atmoshere and dramatic mood of each playback. Shot on location in white-washed, biomorphic dwellings designed by the late architect Ian Athfield in remote areas of New Zealand, Winter depicts the life of a community that seems to exist as the last human settlement on Earth. Possible aftermaths of a nuclear war or an environmental catastrophe are evoked in the characters’ contemplation of their deserted surroundings or the relics of a disappeared society. Architecture and props appear simultaneously futuristic and relegated to the past. Birds, particularly, seem to play a special part in the survivors’ longing. As the familiarity of depicted places and objects reinforces their ambiguous eeriness, the film’s soundtrack emerges as the key to establishing their potential meaning.

Alternating between playback and live performance, this presentation of Winter allows visitors to experience, on a regular basis, the gallery as a space of active, creative production. Originally commissioned for the 2013 Auckland Triennial, this presentation at the Guggenheim Museum Bilbao will be Winter’s European premiere.

Amie Siegel’s work has been the subject of recent solo exhibitions at South London Gallery; The Metropolitan Museum of Art, New York; Kunstmuseum Stuttgart; Villa Stuck, Munich as well as featured in group exhibitions at Witte de With, Rotterdam; Whitney Museum of American Art, NY; Hayward Gallery, London; MAXXI Museum, Rome; CCA Wattis, San Francisco, MoMA/PS1, NY and the Haus der Kulturen der Welt, Berlin. Her films have been screened at the Cannes, Berlin, Toronto and New York Film Festivals, and she has been a fellow of the DAAD Berliner-Künstlerprogramm and the Guggenheim Foundation. She lives in New York City.