Christie’s announces that Property from the Collection of Stanford Z. Rothschild, Jr. will be offered across a series of sales in November and December, including the 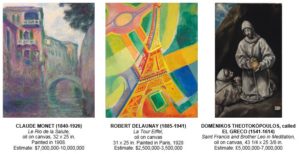 rn Art, American Art and Old Masters sales. Stanford Z. Rothschild, Jr. was an investor, philanthropist and collector who helped champion civic leadership in his Maryland community. Enthralled with artists and the creative process, Stan assembled a striking collection of paintings, sculpture, and works on paper by artists whose work was both intellectually rigorous and historically provocative. He was especially drawn to El Greco, Claude Monet, Robert Delaunay, Georgia O’Keeffe, and Russian artists of the twentieth century. In his lifetime, Stan amassed one of the largest, privately owned collections of Russian avant-garde art in the United States. Certain works in the collection are being sold by the Rothschild Art Foundation, a charitable organization founded by Stanford Z. Rothschild, Jr.  Overall, the collection includes 51 works and is expected to exceed $30 million.

Conor Jordan, Deputy Chairman Impressionist and Modern Art, comments: “Stanford Rothschild, Jr.’s forty-year journey in art collecting was distinguished by an ambitious range and a keen sense of quality.  Few collections range from the 17th to the 20th century; fewer still are as rich in prime examples from the artists represented. Whether it is the expressive force of El Greco’s ‘Saint Francis and Brother Leo in Meditation,’ or the scintillating atmosphere that marks the two fine Monets of the Normandy coast and Venice, Stan’s attention to the compelling experience a great work of art should offer is present everywhere.”