Figurative Painter Sheba Sharrow Illuminates Brutality and Beauty of Human Condition in Fall Show
As one of its series of events around the theme of “Art + Activism,” Monmouth University hosts an exhibition of paintings by the 20th-century artist who chronicled outrage and compassion for the struggles against injustice.
WEST LONG BRANCH, N.J. – Figurative painter Sheba Sharrow bore witness to human suffering, struggle and liberation. She was a child of the Great Depression and World War II, a participant in the social justice movements of the 1960s and ‘70s, saw the bloody roads walked for civil rights and the damages wrought by wars.  Through a vigorous and poetic hand, her works reflects on brutality and simultaneously pays homage to the animating power of solidarity, warning us: Remember, history’s tragedies repeat.
Sharrow’s work will be the focus of the single-artist exhibition tied to the university-wide theme of “Activism” from September 5, 2017 through December 3, 2017 at the DiMattio Gallery and is co-curated by Scott Knauer, Monmouth University’s Director of Galleries; Mark Ludak, Specialist Professor of Photography; and guest curator James Yarosh.
Born in Brooklyn in 1926 to Russian-Jewish immigrant parents, Sheba Sharrow grew up in Chicago and earned her BFA at the Art Institute of Chicago, studying with Boris Anisfeld and Joseph Hirsh. She continued her studies at the Pennsylvania Academy of Fine Arts and earned an MFA at the Tyler School of the Arts at Temple University. She has been considered part of the “Chicago School” of imagist painters, fitting generationally into the “Monster Roster” group of artists from that city, including the most well-known of her classmates to lead that charge of image and ideas over pure abstraction, Leon Golub and Nancy Spero. A resident of Cherry Hill, NewJersey, Sharrow died in 2006.
In the dominant milieu of Abstract Expressionism beginning in the 1950s, which actively rebelled against identifiable “meaning,” Sharrow remained grounded in a humanist tradition and a social context. Curator and writer Alejandro Anreus placed her “in the company of Kollwitz, Beckman, and Orozco,” and writer Amy Fine Collins linked “her sensibility to German Expressionism.” Sharrow’s unique style of storytelling and her occasional use of poetic text stand her apart. Her artistic intentions were deeply intellectual. “As long as the world is going the way it’s going, I cannot stop what I have been doing,” Sharrow told The New York Times in 2001. She lamented, “We cannot seem to get it right.”
“As our country divides over new leadership and faces new policies, it is important to reexamine how the arts have always and will continue to connect shared humanity going forward. This exhibit allows us to refocus on one of the postwar America’s women painters, for whom making art was political as well as deeply personal,” says James Yarosh of James Yarosh Associates in Holmdel, N.J., who has been representing Sharrow’s work for about a decade. “She takes difficult subject matter, and what begins as ‘disturbing’ becomes great art that favors beauty and gives us contextual message and safety in it’s brilliance,” the gallerist says.
The works will be on loan from both the Estate of Sheba Sharrow and James Yarosh Associates Fine Art Gallery as well as from institutions such as the Jersey City Museum  and private collections.
ABOUT SHEBA SHARROW:
Sheba Sharrow exhibited steadily over the course of her career and won multiple awards, including those from the Pollack-Krasner Foundation, Geraldine R. Dodge Foundation, the New Jersey and Pennsylvania Councils on the Arts, and was a three-time nominee for the Joan Mitchell Foundation Award. Her work belongs to many private, museum and corporate collections, including The Steelcase Corporation, The Armstrong Corporation, World Industries, Citibank, The Signa Corporation and The RiteAidCorporation, among others, and has been most recently seen at the Art NYC Miami and Art Context Miami fairs.
Her work has been exhibited in over 30 solo shows at museums, universities and galleries.  Sheba Sharrow | shebasharrow.com
ABOUT MONMOUTH UNIVERSITY:
With three dedicated galleries for the visual arts, Monmouth University plays host to the creative visions of painters, sculptors and multimedia artists from across the United States and abroad, as well as the unique work of its students and faculty. Joan and Robert Rechnitz Hall, DiMattio Gallery, 400 Cedar Avenue, West Long Branch, NJ 07764-1898.  Sheba Sharrow
JAMES YAROSH ASSOCIATES FINE ART GALLERY
& Interior Design Services for the Art Collector  –  Design Trade Welc
Established in 1996, the James Yarosh Associates Fine Art Gallery in Holmdel was founded upon and remains loyal to its vision: to represent fine art for art’s sake and to curate gallery collections and thoughtfully present art with an artist’s eye and understanding. Yarosh, an artist and well-published interior designer who honed his eye for selecting and representing artists by managing galleries in Manhattan and New Jersey, offers a full-scale gallery and design center where clients can associate with other art-minded individuals to celebrate art and the talents that create it. As a designer, Yarosh travels the world, studying how the greatest museums display their art, and visits artists’ homes to understand how the artists themselves live with their art.
Yarosh’s trademark ability is integrating art and design, resulting in visual excitement while allowing both disciplines to still stand on their own merits. This approach has led to his designs being featured in regional and national magazines. In addition, his experience in large-scale residential design projects of over 20,000 square feet earned him a guest appearance on HGTV. As a gallery owner, Yarosh has received national critical acclaim for presenting Russian fine art collections and recognizing significant art movements in their early stages. Drawing upon both international and regional resources, Yarosh represents a variety of artistic voices of our times by showcasing the works of both new and established, museum-recognized artists of merit in a space designed to replicate the intimacy of an artist’s home.
James Yarosh Associates – Fine Art Gallery
Located in the second floor loft space of the former 1917 firehouse
at 45 E. Main Street (Rt.520) in Historic Holmdel Village, NJ 07733 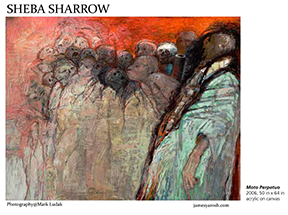