The New York Philharmonic is starting its fall season with a bang, with a dazzling program that combines film and music from “Star Wars.”

The World Premiere of the 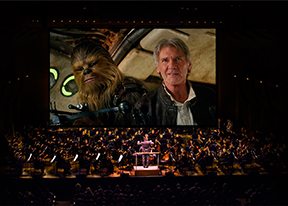 , September 15–October 7, 2017, features screenings of four complete films from the saga — A New Hope, The Empire Strikes Back, Return of the Jedi, and The Force Awakens — with Oscar®-winning composer John Williams’s musical scores performed live to film. These concerts will be led by acclaimed conductor David Newman.

The New York Philharmonic has partnered with New York Comic Con to feature the Star Wars Film Concert Series presentation of Return of the Jedi (October 4­–5) and The Force Awakens (October 6–7) as part of NYCC Presents — a series of concerts, live podcasts, comedy acts, and more that brings New York Comic Con to various venues throughout New York City.

All concert attendees are invited to take part in the Philharmonic’s “Star Wars Film Concert Series Fan Zone” at David Geffen Hall, before and after each performance as well as during intermission. Ticket holders will have the opportunity to meet R2D2, Stormtroopers, and other Star Wars characters from costumed fan groups; in addition, they can take photos in an event-themed photo booth. A commemorative program and other merchandise will be available for purchase and a specialty cocktail called the Cantina Margarita (and its non-alcoholic version) will also be available. Those planning to attend are encouraged to come in costume and share their Fan Zone experience on social media using #nypstarwars.

Since the release of the first Star Wars movie 40 years ago, the Star Wars saga has had a seismic impact on both cinema and culture, inspiring audiences around the world with its mythic storytelling, captivating characters, groundbreaking special effects, and iconic musical scores composed by Williams. Fans will be able to experience the scope and grandeur of these beloved Star Wars films in a live symphonic concert experience, as the Star Wars Film Concert Series premieres September 15–October 7 at David Geffen Hall in New York City. Legendary composer Williams is well known for scoring all seven of the Star Wars saga films, beginning with 1977’s A New Hope, for which he earned an Academy Award for Best Original Score. His scores for The Empire Strikes Back, Return of the Jedi, and The Force Awakens each were nominated for Oscars for Best Original Score.

The Star Wars Film Concert Series is produced under license by Disney Concerts in association with 20th Century Fox and Warner/Chappell Music.