Rodin at the Brooklyn Museum: The Body in Bronze Presents 58 Sculptures by Auguste Rodin on the Centenary of the Artist’s Death On view November 17, 2017, through April 22, 2018

The Brooklyn Museum marks the hundredth anniversary of Auguste Rodin’s death, in 1917, with an installation of the Museum’s remarkable collection of 58 Rodin sculptures in bronze, acquired through a generous gift from the Iris and B. Gerald Cantor Foundation in 1983.
On view from November 17, 2017, through April 22, 2018, Rodin at the Brooklyn Museum: The Body in Bronze will highlight the extraordinary tension in Rodin’s work between the figure itself and abstract form, allowing the fluid contours, animated surfaces, and emotional presence of these bronzes to emerge fully. Accompanying interpretive texts will place the works on view in their historical context, examine Rodin’s legacy and reputation, and explore his sculptural practice and the bronze casting process. The exhibition is curated by Lisa Small, Senior Curator of European Art.
Rodin heralded a new era in sculpture, and he is represented here through each phase of his prolific career, including small and monumental works related to his best-known commissions: The Gates of Hell (begun 1880), the Monument to Balzac (1891-98), and The Burghers of Calais (1884-95). Also featured are some of his sensitively rendered studies of hands, which attest to Rodin’s belief in the aesthetic integrity and independence of the fragment. The presentation also includes several ancient sculptural fragments from the Museum’s collection that are similar to those that inspired Rodin and were collected and displayed in his home and studio.
“The expressive human body— in whole and in part— was Rodin’s grand theme,” states Lisa Small. “We are fortunate that the Museum’s collection allows us not only to explore his formal experimentation, his engagement with antiquity, and how he reimagined traditional forms of portraiture and commemorative sculpture, but also to think about the various lenses through which his work has been interpreted.”
About Auguste Rodin
Auguste Rodin (1840-1917) occupies a pivotal position in the history of sculpture. Straddling two centuries, his work emerged from and continued to encompass the long-standing classical ideals of the French Academic tradition while at the same time leaving them behind in favor of extraordinary formal innovations. He strove for success within the established framework of government-sponsored exhibitions and commissions, yet refused to compromise his unconventional ideas about art. While Rodin often took allegorical, mythological, literary, or historical themes as his subjects, his portrayals marked a significant departure from his predecessors. Age, deformity, and accident were banished from the Academic canon of beauty, but Rodin embraced them, claiming that true artists transformed such aspects of life into eloquent affirmations of nature’s splendor. The implications of Rodin’s ideas have inspired significant experimentation by subsequent generations of modern sculptors.
About Iris and B. Gerald Cantor
Before B. Gerald Cantor’s death in 1996, he amassed more than seven hundred works by Auguste Rodin, four hundred of which he donated to seventy institutions around the world. His widow, Iris Cantor, is president of the Iris and B. Gerald Cantor Foundation, established in 1978 to fund medical, educational, and cultural institutions and projects. In addition to her work with the foundation, Mrs. Cantor handles the acquisition and donation of artworks. A Brooklyn native, Mrs. Cantor has also served as a Trustee of the Brooklyn Museum, where, as B. Gerald Cantor once noted, she experienced “her first joys of aesthetic discovery.”
Rodin at the Brooklyn Museum: The Body in Bronze is organized by Lisa Small, Senior Curator, European Art, Brooklyn Museum.
This exhibition is made possible through the generous support of the Iris and B. Gerald Cantor Foundation. 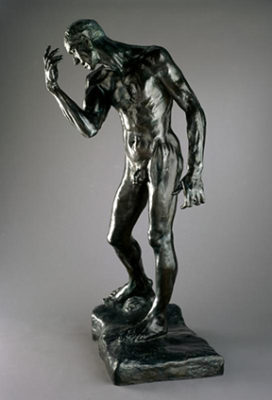