Visitors to the Brooklyn Museum will have the opportunity to observe Museum conservators conducting preservation efforts on the collection masterpiece A Storm in the Rocky Mountains, Mt. Rosalie (1866), by Albert Bierstadt. Conservation will take place in view of the public on Wednesdays through Sundays from June 7 through July 16, 2017, from 11 am to 1 pm and 2 to 4 pm in the 5th Floor Rotunda gallery. Visit www.brooklynmuseum.org for updates on conservation hours.
“The conservation of this masterpiece is taking place in the Rotunda partly due to the object’s large size, which limits its maneuverability,” states Lisa Bruno, Carol Lee Shen Chief Conservator. “However, this provides a unique opportunity to share with the public an aspect of preservation that is usually done behind the scenes. We’re looking forward to this project’s transparency and to showcase the importance of preservation to the public.”

The painting will return to the American Art galleries once conservation is complete. These conservation efforts are in preparation for an upcoming exhibition of the Museum’s American landscapes, organized and curated by Kim Orcutt, Brooklyn Museum Andrew W. Mellon Curator of American Art. The exhibition will travel to multiple venues before ending its tour at
the Museum.
Lauren Bradley, Associate Paintings Conservator, and Jessica Ford, Assistant Paintings Conservator, will focus on removing surface dirt and deposition from the painting and its gesso and gilt frame. The painting received its last extensive treatment in 1976.
About A Storm in the Rocky Mountains, Mt. Rosalie

Composed from on-the-spot sketches made in Colorado during the artist’s second expedition west in 1863, the painting is intended to convey the sublimity of the western frontier. Its grand scale and panoramic scope offer an immersive experience. A group of Native Americans hunting deer draws viewers into the foreground, while the background is animated by rushing water, extreme contrasts of cast light and shadow, and mountains soaring into breaking clouds. Bierstadt named the highest peak, Mount Rosalie (now Mount Evans), after the wife of his travel companion, the famed author and explorer Fitz Hugh Ludlow. Rosalie Ludlow divorced her husband and married the artist a few months after the painting’s debut. The canvas drew admiring crowds when it toured the United States and London in the late 1860s, and it was purchased by an English collector by 1866. It was then thought to be lost for nearly a century before its rediscovery in 1974. 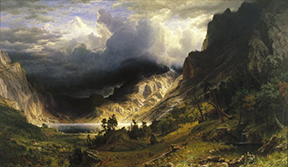