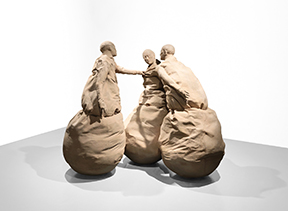 Contemporary Art Collection and offers a conversation with a select group of works within the classical architectural setting of the Main Hall.

The ”la Caixa” Foundation is an important collection of contemporary art offering various interpretations of art from the past four decades. It is also the throbbing heart of new dialogues and narratives underscoring the meaning and actuality of those very same works.

“The title,” said Cristiana Collu, director of La Galleria Nazionale, “does not just allude to the theatre and once again to cinema; rather, it translates on the museum stage dialectics, dialogue, and relations that belong to other areas. A direct reference is the book Scene di Conversazione by Mario Praz, whose house-cum-museum was a satellite of the Galleria Nazionale, to which it remains linked in sentimental terms, and Gruppo di famiglia in un interno, Luchino Visconti’s next-to-last film, whose subtitle is Conversation Piece. We could go all the way back to the 18th century, to the painting genre, but the English translation instead appears to be perfect for our intentions: something unusual that triggers a comment. When one stands on the stage (of the world, life, the museum), one is never neutral, and the conversation comes to life and can even ‘come alive.'”

Under the title Conversation Piece, name derived from a sculptural ensemble by Juan Muñoz, the exhibition relates a dozen-odd works by artists with different poetic voices. As suggested by the expressive gestures of Muñoz’s three characters, the show has the assertiveness of dialogue, but also that of contrast and intrigue, and is driven by the search for revelatory meaning.

The subtle, horizontal bands by Agnes Martin and the material density of Richard Serra’s black surface contain traces of the formalist vocabulary of Minimalism. The geometric principle underlying these paintings is tempered by spaces of light and intervals of stillness interwoven in the mesh of waves of silvery light from the monochromatic landscape depicted by Joan Hernández Pijuan, and in the existentialist silence evoked by Antoni Tàpies in the bareness of his white painting. Donald Judd’s Minimalist sculpture bridges the gap between his generation and that of later artists who would subject the movement’s formal paradigm – the box – to all kinds of deconstructions and variations in order to reintroduce a sense of the real in art and a meaning that connects it to society. Rachel Whiteread re-materialises architecture’s empty spaces, returning art to lived spaces, while the exquisite architectural units by Fernanda Fragateiro, who also mediates skilfully in spaces, evoke the utopias that have steered art towards social issues. In their turn, the mock-ups by Thomas Schütte move away from the orthodoxy of Minimalism towards an imaginary architecture that opens spaces up to fiction and to reflections on social organisation. The sense of unreality of these mock-ups is as intriguing as the one generated by Muñoz’s three extraordinary characters with their depersonalised faces, hybrids between people and sacks. Their presence evokes a premonition of human finitude, of a world that is gradually becoming unnatural, like the 3D reproduction made by Julião Sarmento of Degas’s ballerina. The dancer portrayed by the Portuguese artist has greater realism, particularly as regards its form and eroticism, and yet this incarnation of the small sculpture is disquietingly artificial, almost dehumanised. Jana Sterbak, on the other hand, starts from actual action, from the here and now. There is no space for fiction either in her performance or in her subject matter. The last work in the show is a video by artist Ignacio Uriarte, who projects a humorous reflection on the dialectics between human beings and machines. Uriarte filmed actor Michael Winslow flawlessly imitating the sound of thirty typewriters, a feat that could be interpreted as man’s desire to imitate technology.