Painter of the city who bore witness to the changes taking place in his epoch, Fernand Léger is one of the most celebrated figures in the adventure of modernity. From the cubist avant-garde to his commitment to communism, Léger’s painting remains associated with a vision of humanity transfigured by the machine and mass production.

“Beauty is not codified or classified, beauty is everywhere, in the order of a set of saucepans on the white wall of a kitchen as well as in a museum.” Fernand Léger’s catchphrase rings out like a hymn to the freedom of observation, refusing established hierarchy between the fine arts and everyday life. The artist perceives the aesthetic power of modern life, vibrant and colourful, and the extraordinary challenge that this represents to artists.

This retrospective sheds new light on the manner in which the artist reinvents painting by opening himself up to the other arts. Without ever ceasing to be a painter, Fernand Léger contributes to realms as varied as book illustration, theatre sets, mural painting, experimental cinema and photomontage. Few modern painters forged links that tight with creators coming from architecture (Le Corbusier, Charlotte Perriand), the cinema (Abel Gance, Marcel L’Herbier, Sergei Eisenstein…), dance (Jean Börlin), music (Darius Milhaud, Arthur Honnegger…) and poetry (Blaise Cendrars, Vladimir Maïakovski). Beyond the regeneration of forms, his transdisciplinary approach is tied to his political commitment and linked to his desire to make art part of everyday life and to express himself to the greatest number of people.

Organised on a territory which bears the marks of its industrial past, the exhibition represents one of the great events of the 40th anniversary of the Centre Pompidou. It serves as a reminder of the convergence between the artist’s humanist ideas and the founding missions of the establishment: an openness to creation in all its forms, the ambition for an art for everybody and the desire to fully reconcile the modern and the popular.

As a dialogue to the retrospective Fernand Léger, the exhibition presented at the Cité Radieuse in Briey is an invitation to rediscover this iconic Le Corbusier building from the 1950s, situated 40 minutes away from Metz. The exhibition connects the architect’s thinking to the painter’s, revealing a long friendship marked by a common celebration of colour.

Léger and Le Corbusier met in 1920, year in which the architect and painter Amédée Ozenfant initiated the journal l’Esprit Nouveau open to a broad spectrum of interests, namely architecture, painting or modern life. Even if they only collaborated a few times, their exchanges influenced in a decisive manner the role they attached to polychromy in their respective projects. Convinced by the interdisciplinarity of the arts, Fernand Léger worked actively in favour of a “threeway understanding” between the wall, the architect and the painter. Animated by the same desire for colour Le Corbusier considered in his Almanac of Modern Architecture that “completely white, the house would be a pot of cream.”

Thanks to a rich collection of archive—journals, films, photographs, correspondence, etc.—a number of their projects linking architecture and painting, often little known, have been brought to light.

The exhibition conceived in partnership with La Première Rue and le Val de Briey has benefited from generous financial help from the Le Corbusier Foundation.

Still on view
Musicircus
Until July 17, 2017
Infinite Garden
From Giverny to Amazonia
Until August 28, 2017 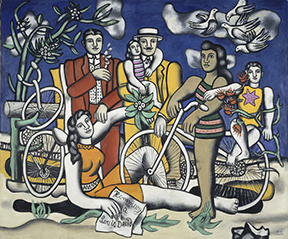