The Guggenheim Museum Bilbao is pleased to present Paris, Fin de Siècle: Signac, Redon, Toulouse-Lautrec, and Their Contemporaries, an exhibition that analyzes the Parisian art scene, underscoring the most important French avant-gardes of the late 19th century, particularly the Neo-Impressionists, Symbolists, and Nabis. The leading exponents of these movements are represented in the show by approximately 125 paintings, pastels, drawings, and prints.

Fin-de-siècle Paris was a time and place of political upheaval and cultural transformation, during which sustained economic crisis and social problems spurred the rise of radical left-wing groups and an attendant backlash of conservatism that plagued France throughout the late 1890s. Mirroring the facets of an anxious, unsettled era, this period witnessed a spectrum of artistic movements. By the late 1880s, a generation of artists had emerged that included Neo-Impressionists, Symbolists, and Nabis. Their subject matter remained largely the same as that of their still-active Impressionist forebears: landscapes, the modern city, and leisure-time activities. However, the treatment of these familiar subjects shifted and these scenes were joined by introspective, fantastical visions and stark portrayals of social life.

The exhibition takes a closer look at these avant-garde movements, concentrating especially on some of the most prominent artists of that time: Pierre Bonnard, Maurice Denis, Maximilien Luce, Odilon Redon, Paul Signac, Henri de Toulouse-Lautrec, and Félix Vallotton. The ambition to spontaneously capture a fleeting moment of contemporary life gave way to the pursuit of carefully crafted works that were anti-naturalistic in form and execution and sought to elicit emotions, sensations, or psychic changes in the viewer. Despite their sometimes contradictory stances, these artists shared the goal of creating art with a universal resonance, and there was even overlap among members of the different groups. Surveyed together, the idioms of this tumultuous decade map a complex terrain of divergent aesthetic and philosophical theories, while charting the destabilizing events at the brink of a new century. 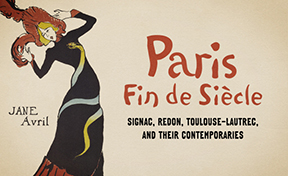