Boaz Vaadia, an Israeli-born sculptor who mined the streets of New York City for material and became internationally known for figurative pieces made from carefully stacked, carved stone, died on Saturday at his home in Manhattan. He was 65.

The cause was pancreatic cancer, his wife, Kim Vaadia, said.

Mr. Vaadia, who had grown up in a farming community in Israel, moved to New York in 1975. At the time, his work consisted mostly of abstractions made from natural materials like stone, wood, fur and feathers.

His figurative style developed as he tried to reconnect with the natural world while living in a loft in SoHo, at the time a blighted commercial and industrial neighborhood in Lower Manhattan.

At first he thought he had “made the worst mistake of my life” by moving to New York, he said in a video that accompanied an exhibition of his work in 2016 at the Grounds for Sculpture park in Hamilton, N.J.

But “within one week I actually recognized that the urban environment of New York is as natural as my village,” he continued. He started “to look for things within this natural urban environment,” he said, “and what happened is that at that time in SoHo they were ripping up all the bluestone sidewalk.” 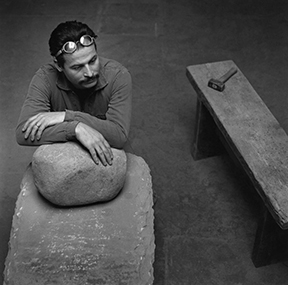 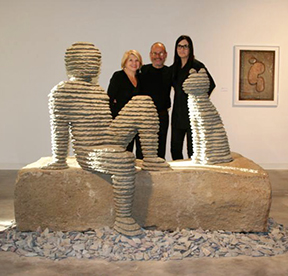 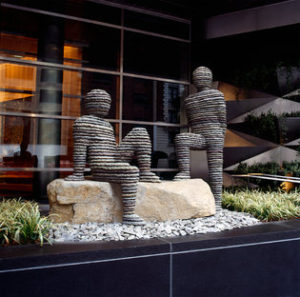 Mr. Vaadia carried and carted the bluestone back to his loft. He conceived of sculptures he wanted to make with this sedimentary rock, but it was prone to breaking along its natural layers instead of his imposed lines.

“I kind of surrendered to it and allowed it to inspire me,” he said.

Mr. Vaadia began to chisel layers out of the stone, then stacked the layers to create humanoid forms. The resulting sculptures, often named after biblical figures and placed in positions of repose, bring to mind statues of the Buddha or the ancient sculptures of Egypt and Easter Island.

Mr. Vaadia eventually moved his studio to Williamsburg, Brooklyn, where he used a forklift to collect boulders dug up on work sites. He incorporated the boulders into his work, as he did in “Asaf and Yo’ah,” which stands in front of the south tower of the Time Warner Center in Manhattan. It consists of two figures, one standing and one sitting, supported by a boulder.

In time Mr. Vaadia became so prolific that he needed to buy a lot of his raw material. Much of his sculpture was made for public settings, in parks and on corporate campuses. His work, which includes bronzes and slate sculptures as well, is also on view in London, Tel Aviv and New Orleans and is in the permanent collection of the Metropolitan Museum of Art.

In 1995, his “Zur With Dog” was included in an exhibition of 20th-century American sculpture at the White House.

Boaz Vaadia was born in Gat Rimon, Israel, on Nov. 13, 1951. His parents, Nissim Vaadia and the former Rivka Horozlaski, farmed strawberries there.

In 1968 he began studying at the Avni Institute of Fine Arts in Tel Aviv. He was drafted into the Israeli Army in 1969 but returned to his studies the next year. After graduating, he taught at Avni from 1972 until 1974. With the help of a grant from the America-Israel Cultural Foundation, he came to New York in 1975 and studied at Pratt Institute in Brooklyn.

His marriage to Ida Sagi ended in divorce. He married Kim Turner in 1989. In addition to her, he is survived by two daughters, Rebecca Vaadia and Sara Vaadia, and a brother, Arnon.

Kim Vaadia said that the family planned to turn his studio into a museum. He worked until nearly the end, she said, and his last finished work was a large stone relief.

Publishers note: He was one of the sweetest, most sincere gentleman I ever met and loved having him involved with the magazine, on the cover and including his fabulous art for everyone to enjoy. I hope he is remembered for his brilliant talent and endearing personality.