There will be a pre-opera discussion led by Beverly Wichman beginning at 12:30pm. Kristine Opolais stars in her first Met performances of her breakthrough role, the title character in Dvořák’s Rusalka, in a critically acclaimed new staging, directed by Mary Zimmerman and conducted by Mark Elder. This haunting love story, inspired by Hans Christian Andersen’s “The Little Mermaid,” will also star Jamie Barton as the witch Ježibaba, with Katarina Dalayman as the Foreign Princess, Brandon Jovanovich as the Prince, and Eric Owens as Rusalka’s father, the Water Sprite. 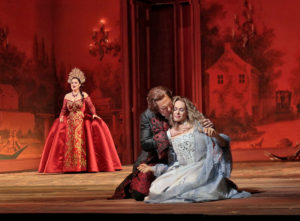