We think of Henry Moore as the preeminent sculptor of the 20th Century. Yet few realize that he was also a master of two-dimensional arts as well,.  Hauser & Wirth Zürich is presenting an exhibition focused on Henry Moore’s early works on paper relating to myth and poetry. Including poetry magazine covers, illustrations for poems by Herbert Read and sketches of the Prometheus myth, the exhibition explores the graphic side of Moore’s practice and provides an insight into his relationship with the literary world. In addition to etchings, lithographs and drawings, several sculptures are also on view including a large-scale work carved from Elmwood that has not been exhibited since the 1950s. Most of the works were created in the years surrounding the end of World War II.  Supporting archival material, such as the artist’s tools, photographs of his etching studio and correspondence with friends such as W. H. Auden and Herbert Read, offer an intimate look into this period in Moore’s career. ‘Myths & Poetry’ has been organized in collaboration with the Henry Moore Foundation and is curated by the artist’s daughter, Mary Moore.

Due to the uncertainty brought by war, in 1940 Moore relocated from Kent and London to rural Hertfordshire. This move forced him to abandon sculpture for two and half years, shifting his focus to drawings and works on paper. A significant project that emerged from this period was the book Prométheé – André Gide’s adaptation of Goethe’s Prometheus, illustrated with Moore’s lithographs and typography. During a trip to Paris, Moore had been invited to contribute to the publication by French typographer and publisher, Henri Jonquieres. The artist produced eight lithographs alongside the cover, title page and letters to begin each chapter. The exhibition presents a group of drawings found in related preparatory sketchbooks (1949 – 1950) where each page is quartered into a sequence of four smaller drawings. Fine works in their own right, they also illuminate how Moore explored the new possibilities for sculpture, most significantly the male figure, something previously unseen in his practice. The drawings present new shapes, forms and textures, each page littered with annotations detailing how the figures could be realized in bronze or clay. 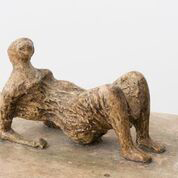 (The exhibit is on view in Zurich until March 11. For further information, check out www.hauserwirth.info