Fredric Snitzer Gallery and Loretta Fabricant invite you to a one night benefit for The Cystic Fibrosis Foundation.

*A portion of proceeds from the sales that evening benefit the CF Foundation.

Rafael Domenech was born in 1989 in Havana, Cuba. In 2009, he graduated from the National Academy of Fine Arts “San Alejandro.” During his time in Cuba, he was included in various exhibitions at the Wifredo Lam Centre for Contemporary Art, the Havana Biennale and the Centro de Desarrollo de las Artes Visuales. In 2010, Domenech arrived in the United States, and a year after enrolled in the New World School of the Arts, graduating as valedictorian in 2015. This transition and process of geographical relocation and cultural integration was transformational, quickly broadening the influences and interests of the artist.

Domenech’s work has recently been exhibited at the Bronx Museum of the Arts, New York; Artium Museum in Vitoria, Spain; the Rockefeller Foundation, New York; The Mordes Collection, Palm Beach. He currently is working on a major installation commissioned by Jorge Perez. In 2015, Rafael was the recipient of the Tulsa Artist Fellowship and the Cintas Fellowship. 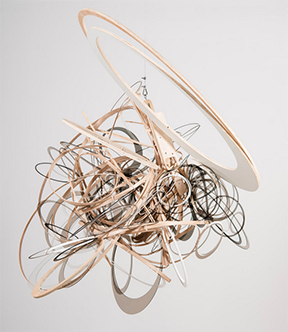