Opening with the presence of the artist

Born in 1972 in Tassin-la-Demi-Lune. Lives and works in Marseilles.

To forge ahead and free oneself from daily difficulties, it is sometimes necessary to draw from our capacities to bounce and to know how to remain positive and dynamic. It is from this conviction that arose the desire of Cyrille André to work on a new series of sculptures representing characters in dynamic attitudes. So, for this new exhibition at Pièce Unique, the artist seems decided to by-pass the limits of scale imposed by the space of the gallery by playing on the choice of attitudes and also to push even aside the codes of sculpture by hanging on these on walls, challenging the gravity.

The attitudes of these characters as well as their outfits (sweatshirts with hoods, shorts, jeans and sneakers) make a reference to the codes of the young people of the circles of the rap, the dance hip hop, the skateboard… They represent before any a youth who deceives the rules of the gravity and takes advantage of an overflowing energy to push always farther the limits of the body and regain control of the public space.

A giant sneaked in the window of Pièce Unique. Far too big for this space, he is held squatted in front of the window, in a state of waiting. Accompanied by a young dog, they observe us with compassion and sweetness. This monumental sculpture, called « Témoin » (witness), joins in the lineage of « Veilleur » (guardian) in 2008 and both « Penseur » (thinker) of 2008 and 2012, becoming the synthesis and the outcome of the artist’s evolution. It represents the figure of a friendly giant who puts himself in our height to get closer to us and start a dialogue. The young dog sits and is at one with this giant, he observes us too. In the alchemical language, he is the allegorical the figure of the wise person.

For Pièce Unique Variations, the artist imagined some characters named « Wall runner ». They are congealed in their movements in touch with the wall at more than a meter from the ground and seem in weightlessness. These are inspired by the “wall running”, a practice that consists in gaining speed by running to follow one’s course by climbing on a wall and jumping from a wall or a roof to another one. Their purpose? To challenge as long as possible the strengths of the gravity.

Represented by the Gallery since 2004, Cyrille André is currently participating at Biennal Sculpture of Yerres until July 10 where we can see at the same time the sculpture « Grand Passeur » acquired by the city in 2012 installed permanently on the square of the CEC. 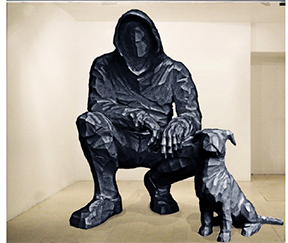 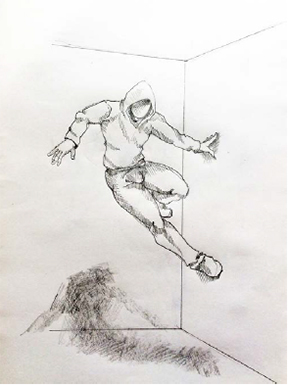