S.M.A.K presents a restaging of Invisible Beauty, the exhibition originally shown as the National Pavilion of Iraq in the 56th Venice Biennale in 2015. In 2015, the Iraqi Ruya Foundation, established in 2012 to promote culture in Iraq, commissioned Philippe van Cauteren, the artistic director of S.M.A.K., to curate the exhibition for the Iraq Pavilion. He selected five artists who have continued working against the background of 30 years of terror, war and violence in that country. The title of the exhibition—Invisible Beauty—emphasises the invisible position from which they are compelled to operate, both in their own country, where conditions prevent the development of a local art scene, and abroad, which is not aware of the recent art history of Iraq.

The Ruya Foundation and its chair Tamara Chalabi played a crucial part in the preparations. Ruya was set up in 2012 by Iraqi art and culture enthusiasts with the aim of supporting and enriching culture in Iraq and building cultural bridges with the rest of the world. The exhibition in Venice that emerged from the cooperation between Ruya and Philippe van Cauteren commented on the violence against the population and the destruction of age-old world heritage. Not by focussing on work that depicts the horrors of terrorism, but with work by artists whose artistic practice is founded on commitment, quality and the quest for identity and independence.

From the very start of this cooperation, it became clear that Invisible Beauty would be more than a short-term project. The establishment of a visible position for contemporary Iraqi artists and their work turned out to be a lasting necessity. S.M.A.K. is making up for this deficiency in the short term by offering the five artists that van Cauteren presented in the Iraq Pavilion at the Venice Biennale an exhibition platform at the museum in Ghent, too, outside the context of the Venice Biennale.

In the museum setting at S.M.A.K., these contemporary artists from Iraq and the diaspora are showing mainly recent but also earlier work in various media: Latif Al Ani, Akam Shex Hadi, Rabab Ghazoul, Salam Atta Sabri and Haider Jabbar. The political context they work in has changed since their exhibition in Venice last year. The foundation of a worldwide caliphate proclaimed by IS in June 2014 and the violence that goes with it have brought about the present refugee crisis. The exhibition itself has grown and developed against the backdrop of this political changes and this restaging of Invisible Beauty responds to the still changing situation in 2016.

An exhibition catalogue entitled Invisible Beauty, has been produced in collaboration with Mousse Publishing. The book contains original texts on each of the five contemporary artists included in the exhibition. Director of Artes Mundi Karen MacKinnon discusses the work of Cardiff-based visual artist Rabab Ghazoul. Director of the Salzburger Kunstverein and photo historian Seamus Kealy comments on the work of contemporary photographer Akam Shex Hadi. Latif Al Ani, who can readily be called the founder of Iraqi photography, is interviewed by Ruya’s chair, the writer and historian Tamara Chalabi. Painter Haider Jabbar is discussed by Luk Lambrecht, the curator of Cultuurcentrum Strombeek and Salam Atta Sabri’s work is explored by Philippe van Cauteren, who also introduces the catalogue. Other texts are contributed by Lamia Al-Gailani Werr, Fares Haram, Ali Bader, Sherko Bekas and Atyaf Rasheed and document different periods and disciplines in Iraqi art history.

Commissioned and organised by the Ruya Foundation, which was established in 2012 to promote culture in Iraq. 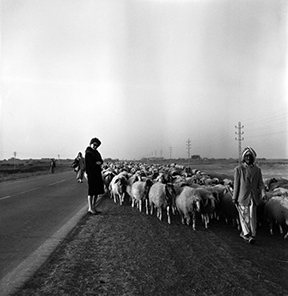