GAVLAK Los Angeles is pleased to present an exhibition of new work by Lecia Dole-Recio. Combining painting and collage,
Opening Reception: Friday, May 13, 6-8pm
May 13 – July 9, 2016

Dole-Recio creates vibrant, abstract works that push the boundaries of painting by incorporating the surface itself as the medium. Populated with striking diagonal lines and triangular forms, the works read as highly physical, containing an innate velocity.

For this exhibition, Dole-Recio was inspired by a show at The Norton Simon Museum on the discovery of the color Prussian blue, and many of the works explore the subtle interplay between gradient shades of blue. By pairing similar colors in close proximity to one another, Dole-Recio creates the illusion of  three-dimensionality through shadow and relief, an idea that she explores more directly by layering geometric forms, and by removing sections from the composition, creating both physical relief and negative space. While all of the pieces on view are frameless and mounted on aluminum and wood panel, many incorporate the idea of framing into the painting, obfuscating the traditional delineation of where things end and begin.

Dole-Recio elaborates on the language and vocabulary that she has developed over the past decade and a half, playing with the repetition of specific forms and colors to create a dramatically different effect in various works. Among the works on view, two pieces created as mirror images of one another and composed in various shades of blue will be presented as a diptych. These particular works highlight the way in which Dole-Recio’s practice is becoming at once more subtle, with the gentle gradation in colors, and at the same time more obvious, with the large, geometric sections of the work removed and glued back on in inverse relationship to one another. By creating two iterations of a single idea, Dole-Recio highlights the possibilities for cardboard as a media and the way in which a painting can be physically constructed. 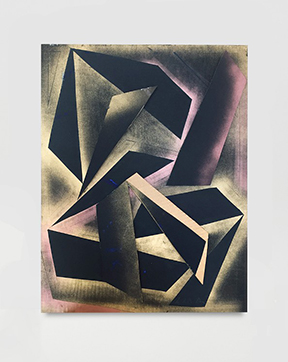