Denise Bibro Fine Art, 529 West 20th Street, Chelsea, New York City, is pleased to announce In The Air: New York, featuring artists Sol Kjøk and Peter Max-Jakobsen, June 2- July 2, 2016. This joint exhibition is comprised of two-dimensional works accompanied by a one-time live interdisciplinary performance, Whispers in the Air.
In the Air is a collaborative investigation of interconnectivity of visual expression and mystical science theory.  Through serendipitous development, Kjøk and Max-Jakobsen’s work parallel in imagery and meaning.  Intertwined figures composed by line, mark, and color represent the unity between native spirituality and its growing validation in the scientific community.  The repetitive and chaotic figural compositions, alongside fluid, biomorphic forms, contrast the sense of oneness while still singularly consistent with spiritual experience. It seems to be an eerie fate that both these artists have found each other.
Born in Norway, Sol Kjøk is a New York based artist whom has been featured in more than one-hundred shows worldwide as well as taught and lectured at universities across the United States. Kjøk is represented in public collections such as the Cincinnati Art Museum, the Nordic Museum of Drawing, and the Osten Museum of Drawing, as well as numerous private collections. She founded NooSPHERE Arts, a nonprofit exhibition and performance venue, on the Lower East Side, a collaborative arts platform called Last Frontier as well as Mothership, an arts collective in Brooklyn.
Peter Max-Jakobsen is an established Danish artist that has been featured in multiple museum exhibitions at the Vendsyssel Museum of Art, Vestjysk Museum of Art and the Museum Kastrupgaardsankingen. Max-Jakobsen is a board member of the Hjorring Graphic Workshop, and taught material experimentation and sketching methods at the Royal Academy in The Hague. He has completed many successful commissions for various associations including Hjørring Ktiminalertmand Bergneser Law.
Both artists will be present at the reception.
Live Performance: Whispers in the Air, June 9th 6-8pm

Katy Gunn and Autumn Kioti Moonface: a continuation of the interdisciplinary collaboration that first took place at Last Frontier NYC in October of last year 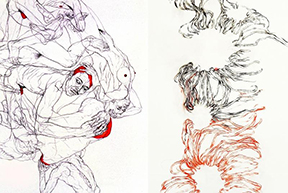