Ever since silent films were all the rage, music has played a vital role in the evolution of the art of film. The New York Philharmonic is committed to exploring the key relationship. As part of its ongoing programming of film and music, the orchestra will present three film music programs in May 2016: a complete screening of Charlie Chaplin’s City Lights, May 19, 2016, with the Orchestra performing Chaplin’s score live, conducted by Timothy Brock, who restored the score for live performance; 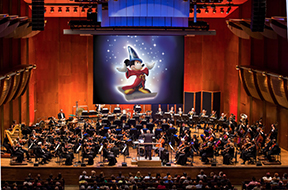 Live in Concert, May 20–21, 2016, in honor of Fantasia’s 75th anniversary, in which scenes from Fantasia and Fantasia 2000 will be screened as the Orchestra performs the music live, led by Assistant Conductor Joshua Gersen; and the Spring Gala, A John Williams Celebration, May 24, 2016, with the Orchestra performing music from the Oscar-winning film composer’s iconic scores, led by David Newman, along with clips from select films.
(for more information, check out www.nyphil.org)