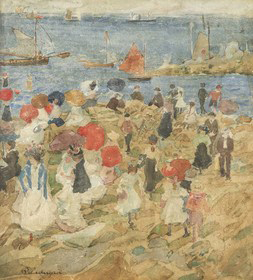 Gerald Peters Gallery, New York, is pleased to announce its participation in the Palm Beach Jewelry, Art & Antique Show. The gallery will exhibit works from its extensive inventory of American Art with a focus on American Impressionism and Modernism. Among the selection of paintings by Thomas Dewing, Childe Hassam, Robert Henri, Edward Potthast, Theodore Robinson, and Willard Metcalf are two prime watercolors by Maurice Prendergast.
At this year’s fair, the gallery is also presenting two focus installations: one concentrated on paintings and sculpture by women artists of the 19th, 20th and 21st centuries; the other dedicated to masterworks by sculptor Paul Manship.
Georgia O’Keeffe, Sunflower, 1921, oil on board, 15 x 12 1/8 inches
In honor of the Norton Museum of Art’s upcoming exhibition, O’Keeffe, Stettheimer, Torr, Zorach: Women Modernists in New York, the gallery is pleased to present a selection of paintings and sculpture by women artists who form a primary part of our exhibition program and core inventory. In parallel with the Norton’s exhibition, the gallery will showcase works by American modernists, including Georgia O’Keeffe, Marguerite Zorach, Abastenia St. Leger Eberle, and Henriette Wyeth.
The installation will also extend the timeline backward into the nineteenth century and forward into the present day. Paintings and sculpture by nineteenth-century artists Edmonia Lewis, Virginia Granbery, Lilla Cabot Perry, and Mary Cassatt, remind viewers of the extraordinary success of these artists who flourished in the male dominated art world of their century.
Works by contemporary women artists, including Clarice Smith and Jasmina Danowski, show how artists of today are continuing the tradition of innovation and creativity established by their historical counterparts.
Clarice Smith, Leaving the Gate, 2011,
oil on canvas, 22 x 56 inches
Paul Manship was the “court sculptor” to America for the first half of the twentieth century. His sophisticated style combined classical motifs, streamlined silhouettes, and decorative elements of Art Deco with unrivaled surface treatment. He broke with conformity and integrated every stylistic form he confronted. His work was championed as the definition of contemporary art with good taste in the United States and abroad.
Gerald Peters Gallery will be presenting a collection of major works by this unrivaled sculptor. Included will be his 1916 Briseis (one of only three examples cast in this large size), a sculpture that evidences his technical dexterity in its refined surface detail. His mammoth lead urn, Europe, created in 1917 for the garden of Pittsburgh steel magnate, Charles Schwab, reveals his acute mastery of scale and medium. And his Flight of Europa from 1925, with its gilt surface and agate base, showcases his creative use of media. These and other landmark works reflect the imagination and creativity that made Manship a unique force in American sculpture.