Sergei Rachmaninoff is the drama queen of piano composers, beloved by musicians and music lovers all over the globe. From now until the End of November, the New York Philharmonic is celebrated his work in a series of impressive programs, starring the 24-year-old Russian prodigy, Daniil Trifonov. This boy wonderis considered by many to be the great composer’s spiritual and musical heir.
Combining consummate technique with rare sensitivity, Russian pianist Daniil Trifonov has made a spectacular ascent to classical stardom. Since taking First Prize at both the Tchaikovsky and Rubinstein competitions in 2011 at the age of 20, he has appeared with most of the world’s foremost orchestras and given solo recitals at many of its most prestigious venues. Following the release of Rachmaninov Variations, recorded for Deutsche Grammophon with The Philadelphia Orchestra, in the 2015–16 season Mr. Trifonov is spotlighted in both the New York Philharmonic’s Rachmaninoff: A Philharmonic Festival and the Philharmonia Orchestra’s Rachmaninov Piano Concerto Cycle. He also plays Rachmaninoff concertos in debuts with the Berlin Staatskapelle, Royal Stockholm Philharmonic (where he anchors the Nobel Prize Concert), Philadelphia Orchestra, Munich Philharmonic, and Orchestre National de Lyon, and on the Czech Philharmonic’s tour of Asia. He is performing Prokofiev in his Montreal Symphony debut and returns to the Orchestre National de France and London Symphony Orchestra, and Chopin with the San Francisco Symphony, Tchaikovsky with the London Philharmonic Orchestra at Milan’s Teatro alla Scala, and Liszt with the Pittsburgh Symphony Orchestra at home and on a North European tour. An accomplished composer, Mr. Trifonov reprises his own acclaimed piano concerto with the Pittsburgh Symphony. In addition to making his Los Angeles recital debut, he undertakes a European recital tour and residencies in Lugano and at London’s Wigmore Hall. Last season saw the release of Trifonov: The Carnegie Recital, the pianist’s first recording as an exclusive Deutsche Grammophon artist, which scored a Grammy nomination and an ECHO Klassik Award. His discography also features a Chopin album for Decca and Tchaikovsky’s Piano Concerto No. 1 with Valery Gergiev and the Mariinsky Orchestra. Born in Nizhny Novgorod in 1991, Daniil Trifonov studied at Moscow’s Gnessin School of Music and the Cleveland Institute of Music. In 2013 he won Italy’s Franco Abbiati Prize for Best Instrumental Soloist. Daniil Trifonov made his New York Philharmonic debut in September 2012 performing Prokofiev’s Piano Concerto No. 3, led by Music Director Alan Gilbert. During the 2014–15 season he returned to perform Rachmaninoff’s Piano Concerto No. 1 with the Philharmonic, led by Juanjo Mena.

From November 10–28, 2015 Trifonov performs three of the composer’s piano concertos and the Rhapsody on a Theme of Paganini over the course of three consecutive all-Rachmaninoff programs, each led by a different conductor: Cristian Măcelaru (in his Philharmonic debut), Neeme Järvi, and Ludovic Morlot. The festival will also include a chamber program on which Mr. Trifonov will collaborate with Musicians from the New York Philharmonic, co-presented with 92nd Street Y, and a vocal concert co-presented by the Kaufman Music Center and New York Festival of Song. Rachmaninoff continues the Philharmonic’s annual, multiweek festivals, an initiative Alan Gilbert introduced in his inaugural season as Music Director.
(more)
Daniil Trifonov made his Philharmonic debut in the 2012–13 season performing Prokofiev’s Piano Concerto No. 3, led by Alan Gilbert. He returned in the 2014–15 season to perform Rachmaninoff’s Piano Concerto No. 1, led by Juanjo Mena. The New York Times wrote of that performance: “His sound bright and lean at the start, he brought out the work’s focus, even as he gave the impression of flexibility. In the first movement, confidently varying the pulse, he wove his lines around the orchestra’s. The great solo melody near the start of the slow second movement had a wandering if attentive feel, as if it were an impromptu, and Mr. Trifonov’s sound took on a calm lucidity but without a hint of chill. In the finale, he gave his tone silky diaphanousness, keeping a quality of roundedness even in Rachmaninoff’s most pounding runs.”
“Daniil Trifonov plays with a technical ability that is jaw-dropping: he can do anything he wants, and his playing can be mysterious and captivating,” said Music Director Alan Gilbert. “He wraps you around his finger and brings you along on a wild, fantastic, and sometimes terrifying journey. Exploring Rachmaninoff’s breathtakingly difficult but beautifully expressive repertoire through Daniil’s performances is sure to be an adventure.”
“My Philharmonic debut was a special experience and a great honor. I was captivated by the energy, and it was really enjoyable music-making,” said Daniil Trifonov. “The Rachmaninoff cycle will be an exciting adventure. Each of his concertos has a particular atmosphere: in the Second Concerto, his suffering gave birth to amazing music; the first movement of the Third Concerto is one of the most substantial works he ever wrote; the harmonic courage of the Fourth Concerto, where he searches for a new language, is captivating; and in the Rhapsody on a Theme of Paganini there is a sense of something lost and a sense of perfection.”
Rachmaninoff himself appeared as a soloist with either the New York Philharmonic or the New York Symphony (the two orchestras that merged in 1928 to form the modern Philharmonic)
in 41 performances between 1909 and 1942, including numerous performances of his concertos.
Week I
In the festival’s opening orchestral program, Daniil Trifonov is spotlighted in both Rachmaninoff’s Rhapsody on a Theme of Paganini and Piano Concerto No. 2, and the Orchestra performs The Isle of the Dead, conducted by Cristian Măcelaru in his Philharmonic debut, Wednesday, November 11, 2015, at 7:30 p.m.; Thursday, November 12 at 7:30 p.m.; Friday, November 13 at 8:00 p.m.; Saturday, November 14 at 8:00 p.m.; and Tuesday, November 17 at 7:30 p.m. The November 12 performance will be broadcast live on WQXR, New York’s classical station, at 105.9 FM and wqxr.org at 7:30 p.m. Rachmaninoff was soloist with the Philharmonic for the New York Premiere of Rhapsody on a Theme of Paganini in 1934. The composer was also the soloist for the 1901 World Premiere, in Moscow, of his Piano Concerto No. 2.
On November 10, 2015, Kaufman Music Center and the New York Festival of Song will co- present From Russia to Riverside Drive: Rachmaninoff and Friends, a vocal concert at Merkin Concert Hall featuring Rachmaninoff’s Russian songs and the music he heard during his years in 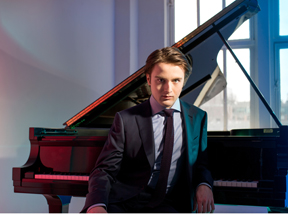