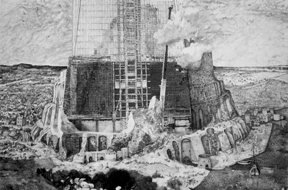 presents his newest work at Art Prize 2015. In his Diaspora series Bastidas presents portraits in the European style of the great masters, quoting from painters such as Hans Holbein, Gainsborough and Hans Hall. While the dresses, backgrounds and poses are straight out of European portraiture, the sitters themselves are however New World indigenous. And they stare back at us with, in the words of Edward Burne Jones, “expressions of character and moral quality, not anything temporary, fleeting, or accidental.” These portraits compose visual and conceptual metaphors connected to the masterpiece that is BABEL (2012), which considers the metamorphosis of our cultures. A mythical symbol of the heterogeneity of languages, BABEL is linked to the Diaspora series through questions about identity and hybridization.  These images exist in a space beyond recontextualization. Is Bastidas asking much deeper questions about hybridization and identity? Or is the primary concern in these works issues of dominance and the newly found might of the New World? Posing many questions, the work serves as a kind of Rorschach test, allowing the viewer and the space to manifest there own inquiries.