Bruce Nauman’s Good Boy Bad Boy (1985) was my first love. It was that work, the one that still, however far and many times I turn, sits at the base of my vocabulary. I don’t know if I can say why, it is just that this work hit something. I’ve never analyzed it particularly, apart from to say that its effect had to do with the use of language, of reading, of acting. Always exact, concise, simultaneously expansive and devastating.

I had always attributed this quality in Nauman’s work to the difference held in repetition, the abstraction of word to sound and back again, a certain undoing. The three lithographs PERFECT DOOR, PERFECT RODO, PERFECT ODOR (all 1973) that open “Bruce Nauman: Selected Works from 1967 to 1990” are not, though, deconstructive. The repetition of Perfect, Perfect, Perfect, the rearrangement of Door to Odor to Rodo, point less to the differential than the additional, not just space between but the surplus created in their phasing. What separates red MALICE and green ƎƆI⅃AM in the neon work Malice (1980) is, after all, not difference but use: the materiality of letters, the literal physicality of form remains. In this sense, it is not the difference between the legible and its inverted abstraction so much as the addition of the two, their coalescence.

Such a bodily interdependence is most acutely material in the 1991 work Four Pairs of Heads (Wax), where bound-together hollow-necked heads, soft-cut by wires, hang bloated-tongued, orifices sealed. A hole is a hole is a hole, additional to the point of absurd, absurd to the point of impenetrable. In Dead End Tunnel Folded into Four Arms with Common Walls (1980–87) bisecting extruded house shaped containers sit windowless, together only by virtue of the walls that render them apart. William T. Wiley or Ray Johnson Trap (1967)—a black-and-white of photograph of the absent body of Nauman’s friend and former professor William T. Wiley outlined by artifacts from Ray Johnson’s mail art—doesn’t question whether it is trap or void: it is both container and contained. In Setting a Good Corner (Allegory and Metaphor) from 1999—a video in which Nauman digs, sets, and binds a fence corner, with comments at the end that critique the process—the literality is one of real-time labor, of a utility that incorporates waste, in which the negative is not positivized but is a valid part of the work.

A material concern with that negative, rather than the act of negating, is what draws me to this work. It is perhaps also why my articulation falters in terms of conceptualizing my care for it. Love is predominantly negative, indisposed to measure. The decorous waste pile of declawed, colored, cut forms of Animal Pyramid (1989) does not contain this quality. The literal, often overcast by the lateral, is present and opaque in the violence of a sound repeating from behind a wall in Audio Video Piece for London, Ontario (1969–70), the blankness of a closed circuit image of the adjoining room on the monitor, the skin pushed and pulled, flesh over teeth, in Studies for Holograms (1970). Not a disavowal of language but a matter-of-fact advocacy of its plastic properties; held on the tongue, resonating from a void, slowed to real time.

In a selection spanning the shifts of 1968 and ’89, these works are neither minimal nor maximal: not less is more, or more is more, but refuting the very criterion of mores. At each juncture, in and between themselves, they are, like plenums, spaces filled with matter. These holes and ditches are abundant in their closures, cavities filled with the weight of pressure. Where use is not synonymous with measure, and waste is not synonymous with loss. A form whose expansive additions and separations articulate the material vulnerability of weight, what it is to rest one against another.

Gil Leung lives and works in London. She is resident at WIELS, Brussels, in 2015. 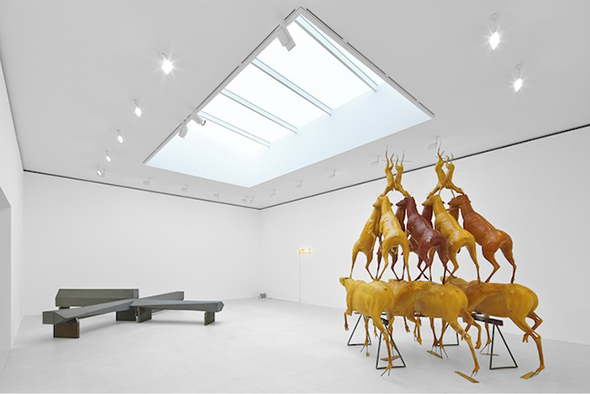