Jose Alvarez (D.O.P.A.)
We’re All Made of Star Stuff

Gavlak is pleased to present We’re All Made of Star Stuff, an exhibition of new work by Jose Alvarez. Working in a variety of media, including works on paper, paintings, video, collage, crystal paintings, and digital murals, Alvarez creates dazzling, brightly-colored works that explore ideas as vast as truth, altered-states, the natural world, outer space, and the nature of consciousness. Over the course of the past two decades, Alvarez has developed a lexicon of forms that he uses to create visually and conceptually complex works that mine his own interior landscape in an effort to connect to the basic human experience. Alvarez’s artistic career began with an elaborate performance in which he toured Australia with his now-spouse, the magician James Randi, pretending to channel Carlos, a 2,000 year-old spirit. Posing as a seer, Alvarez sought to explore the notion of both inhabiting and espousing belief by publicly debunking the notions of soothsayers and charlatans. The performances were as well captured through a series of videos that were ultimately included in the 2002 Whitney Biennial.The exhibition’s title references the philosophy of astronomer Carl Sagan, who featured Jose’s performance in his book The Demon Haunted World: Science as a Candle In the Dark.

The exhibition at Gavlak will be an immersive experience for visitors, featuring floor-to-ceiling wallpaper that Alvarez has created in his signature Technicolor pinks, blues, greens, and yellows, depicting psychedelic patterns and linear forms. Hung directly on the wallpaper will be works in a variety of media, including minimalist mica works, paintings on linen, and large-scale paintings on mica, that depict otherworldly imagery. Interested in exploring the tension between opposites, extremes, and the macro versus the micro, Alvarez creates works that portray a host of contrasting, multilayered imagery. Taken together, the works invite the viewer to get lost in them – to experience what Alvarez describes as a place where “notions of abstraction, painting, parallel universes, and science fiction collide in a cosmology all of its own.” (Read more…)
Vincent Szarek
Like A Rock

Gavlak is pleased to present an exhibition of new work by Vincent Szarek, his first solo exhibition with the gallery. A sculptor with a longstanding interest in car culture and Minimalist art, Szarek has developed a practice that draws on the pristine, high-gloss finish of custom automobiles, the reflective surfaces and experiential nature of Minimalism, and the works of artists like John McCracken, Craig Kauffman, and the practices of the Fetish Finish school of Minimalism and the Light and Space movement to create provocative and stylized sculptural works.

Like A Rock will feature a series of new works that draw on the culture and mythology of the west. The exhibition title references the Chevy commercial that features the Bob Seger song of the same title, which presents an idealized and heroic vision of Americana. From a lacquered white prickly pear cactus covered in thousands of gold-plated needles, to rock piles inspired by frames of the Roadrunner and Coyote cartoons, to an actual Texas longhorn skull that has been molded and lacquered, the works bridge fine art with pop culture imagery and the allure of desert culture.

Szarek began working on cars as a hobby at the age of thirteen, and went on to work as an employee at an auto body shop while in school, an experience that was formative to his practice. There, Szarek learned to use the industrial materials and paints often used in the fabrication of custom-made cars, surfboards, and bikes, and to apply them using hands-on techniques. Despite the pristine and seamless appearance of Szarek’s sculptures, his practice involves tremendous craftsmanship – the works, made with various materials including aluminum and fiberglass, are all hand-made, hand-plated, and hand-glazed, resulting in a carefully crafted yet highly polished finished piece. (Read more…) Gavlak Gallery
1034 North Highland Avenue
Los Angeles, CA 90038 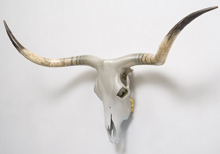 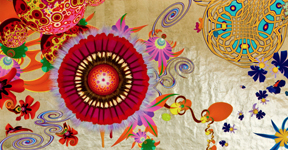