SEED Food & Wine Festival, the nation’s only plant-based food and wine experience, has announced an all-star lineup for its second annual event. This November, the conscious culinary fete will welcome ultra-athlete and author Rich Roll, chef and restaurateur Matthew Kenney, former NBA star and vegan wine owner John Salley, and many, many, other notable names to be announced soon.

The celeb-studded five-day festival will kick off on November 18 through November 22, featuring chef dinners, a grand tasting, film screenings and many other activities, all dedicated to a message of conscious consumption-and delicious cuisine.

“We’re beyond thrilled with the lineup that’s shaping up for 2015,” says Alison Burgos, co-founder of SEED Food & Wine Festival. “Some of the biggest names in the plant-based world will be joining us and helping to make history on the sexy sands of South Beach.”

At this year’s event, the weekend kicks off on Wednesday night with a compelling film screening, soon to be announced. Thursday night, the 1st annual Burger Battle (complete with a green carpet) will showcase the best veggie burgers America has to offer. Friday night brings the return of the Farm to Table Dinner, hosted by five celebrity chefs and local farms. Saturday morning starts with the new 5k SEED RUN, followed by the Outdoor Yoga Experience. In the afternoon, the flagship Seed Festival Day and Tasting Village will showcase an unparalleled display of food, wine and spirits served with a side of celebrity at the culinary demo stage. Saturday night closes with a Modern Dinner Experience, Sunday morning will begin with a new Mantra Yoga Brunch presented by Mantra Yoga & Healthy magazine, and the festivities will conclude with a celebration for mini foodies at Sprouts Kids Day.

This year’s event will continue to add to the nation’s growing-and sometimes controversial-conversations about food and health. Proudly sponsored by Whole Foods, SEED is designed to showcase the delicious side of plant-based living, helping to fuel mainstream acceptance of sustainability and prompting a major change going forward.

Tickets for the 2015 SEED Food & Wine Festival are already on sale at www.seedfoodandwine.com. Follow @SeedFW for updates.

About the SEED Food & Wine Festival:
Seed Food & Wine, presented by Whole Foods Market, is the first plant-based food and wine festival in the country. SFWF celebrates delicious plant-based foods, fine wines, craft beers, spirits, and lifestyle products and companies, all while raising health awareness. Events include upscale dinners, film screening, garden parties, and a Southern brunch, all leading up to a large-scale outdoor festival and grand tasting featuring food, wine, juices, music, gifts, organic body care, clothing, yoga, and everything that celebrates conscious plant-based living. The Festival will gather some of the most talented speakers, chefs, celebrities, athletes and authors for a fun, educational, sexy, hip (and most of all, delicious!) week of food, cocktails, film, parties, and events. 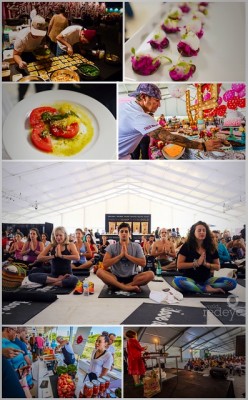