Like A Prayer presents works by 14 artists from 11 countries in the Magasin III collection, together with a group of objects from the collection of The Museum of Mediterranean and Near Eastern Antiquities. The artworks shown are both fragile and forceful investigations of highly personal or collective experiences and memories: Mona Hatoum’s glass hand grenades, Sirous Namazi’s recollections of his flight from Iran, and Ulf Rollof’s processing of pain, to name a few. A central theme in the exhibition is how we humans put great faith in hope when faced with crisis.

“Our own disquiet about the world around us has influenced our perception when selecting pieces from the Magasin III collection. The juxtaposition of objects that were made so recently and those that are over 2,000 years old points to something deeply human. These objects—whether contemporary or from antiquity—can be seen as a sort of prayer in a world rife with incomprehensible violence, anxiety and disease.”
–Richard Julin and Tessa Praun, exhibition curators

This is the first time many of the artists are being exhibited at Magasin III—among them, Eitan Ben-Moshe, Peter Schuyff, Emil Westman Hertz, and Linus Nordensson Spångberg. Like A Prayer will also feature works by Lars Nilsson and Per B Sundberg, whose contibutions are new additions to the museum’s collection.

“The votives were made by local craftsmen, possibly with some instruction from temple visitors. Some of the terracotta figures are cast while others are modeled by hand. After production, they were placed inside the temple: on shelves, mounted directly on the wall, or suspended by a string from the ceiling. These objects were offered in gratitude for or in the hope of a cure for illness or other afflictions.”
–Christian Mühlenbock, Acting Director at The Museum of Mediterranean and Near Eastern Antiquities

Publication
In conjunction with the exhibition, Magasin III will produce a richly illustrated exhibition folder with texts on the the exhibition’s themes as well as the various artworks. It will be distributed free of charge to visitors and will be available as a downloadable PDF at www.magasin3.com.

About Magasin III
Magasin III Museum & Foundation for Contemporary Art is one of Europe’s leading institutions for contemporary art. Located since 1987 in a former warehouse in Stockholm’s Free Port, Magasin III exhibitits its multifaceted collection and ambitious presentations of internationally established artists.

The fall season at Magasin III
New in the exhibition Markus Schinwald: the film Orient (2011), a two-channel video installation, will replace Dictio pii (2001). A new oil painting, Jenn (2014), will join the installation Stage Complex (2015), which fills the entire lower floor of Magasin III. Markus Schinwald is on view through December 13, 2015. 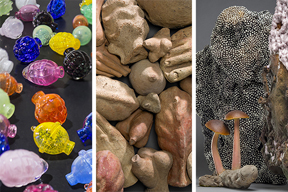