Projected in succession onto the walls of the Central Gallery is a cycle of four films that form the core of 2558. Beginning with 2012–2555, named after corresponding Buddhist and Gregorian calendar years, each independent episode sees Arunanondchai, the Thai “denim painter,” progress towards self-actualization in an arch of death, purgatory in 2556, and spiritual rebirth in 2557 (Painting with history in a room filled with men with funny names 2). Here, the artist’s narrative playfully deconstructs art world binaries—high/low, West/East—in a parody incorporating Duangjai Jansaonoi’s controversial performance on Thailand’s Got Talent. This incident, along with Thai architect Chalermchai Kositpipat’s famed televised response, are thoroughly recapped in 2556 and directly inform Arunanondchai’s execution of paintings in the Nave.

The fourth film, Painting with history in a room filled with people with funny names 3, further situates the artist’s work within a unique cosmology, indoctrinating viewers with his rap star vernacular of philosophical musings on enlightenment. Heaven and Hell become diametrically opposed interpretations of a world created from the feedback loop of experience and synchronous digital documentation. A motif repeated throughout the film and carried over into the works of the Nave, the “search for Naga” is not simply a reference to an exotic cultural symbol, but an allusion to the pan-cultural Ouroboros, an eternal cyle representing his practice.

Together, the Nave and Central Gallery constitute the “body of work,” a notion further underlined by the human outline created from the layout of materials within the exhibition. While intended to be experienced as a whole, the two halves engage different discourses of representation, his films owing as much to the recorded anthropemetries of Yves Klein as they do the modern music video. His paintings, emancipated from the walls of the Nave, result from a set of propositions interrogating memory and the objecthood of art. Arunanondchai often describes his canvases with the analogy “Ctrl z,” the “undo” feature of most software. Burned then re-stitched with photographic documents of the burning, these canvases compress time into one layer, paradoxically revealing the process of creation at the cost of concealing its effect. Appearing several times onscreen, the canvases are artifacts of his filmed performances—as are the clothes dressing the mannequins that people the exhibition space—which, in turn, are ritual re-enactments of a previously aired talent show. These repeated elements, which jump between the virtual and the real, form the basis of a collective memory extending into physical space, imploring the viewer through a gestalt effect to perceive his total work.

With the promise of infinite variation, execution, and revision, the shift towards digital modalities compounded with globalization—read through Arunanondchai’s insistence on the ubiquity of denim—implies a dual flattening in our perceptions of time and geography. In the first installment of the Secret Timezones Trilogy, the works of Ming Wong complied with an unfixed, heterotopian temporalilty, creating a space floating between past, present, and future. 2558 offers another interpretation, opening an affective space in the museum where time melts away.

The Presenting Sponsor is Domus Collection. The exhibition is presented in cooperation with MoMA PS1. The new media art production partner is CP Denmark and WTi Group. Exclusive sponsorship of sound equipment comes from GENELEC. AIR CHINA has provided airline sponsorship. The exhibition catalogue is published with support from Post Wave Publishing Consulting. 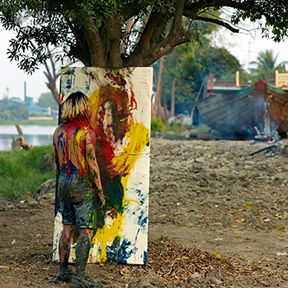