Over the course of the second half of the twentieth century, Edmund Carpenter—anthropologist, author, broadcaster, filmmaker, and communications theorist—assembled one of the world’s finest and most extensive collections of artifacts made and used by the peoples of the Old Bering Sea cultures of coastal Alaska and Siberia. Dating from as early as 250 BCE and carved from walrus ivory (or wood, as seen in rare examples that have survived), these dolls, ornaments, game pieces, tools, and ceremonial objects are diminutive in scale. Mere inches in height, they speak powerfully of cultural forces that led to their creation—specifically, a belief in the fluid and fantastic transformation from human to animal and back again. In MicroCosmos seals and water fowl sprout human heads, pregnant women grow walrus tusks, shamans fly like birds, and mythical beasts shift into multiple shapes.

The exhibition’s opening on August 29, 2015 marks the first public display of the Carpenter Collection of Arctic Art (a trove of some 150 Paleo-Eskimo objects). Alone among archaeologists and anthropologists when he delved into the Arctic and its peoples, Edmund Carpenter conducted groundbreaking research that led to the publication of “Eskimo Realities,” (1959/1973), one of many landmarks in a career that spanned the globe. Edmund Carpenter died in 2011 at the age of 88.

Inviting museum visitors into another world, MicroCosmos: Details from the Carpenter Collection has been organized by its curator, Sean Mooney. Formerly director of exhibition design at the Solomon R. Guggenheim Museum in New York, he has been involved in the mounting of more than 200 exhibitions around the world. The Menil is the exclusive venue for MicroCosmos, which will remain on view for nearly six months, closing February 21, 2016.

Said Josef Helfenstein, director of the Menil Collection: “We are fortunate that Ted Carpenter’s brilliant intellectual contributions included significant activities at the Menil Collection, including the exhibition Upside Down: Arctic Realities and the permanent installation Witnesses to a Surrealist Vision. Our presentation of MicroCosmos is both a tribute to Ted’s memory and a fascinating introduction to a material and spiritual universe that he helped to illuminate.”

In addition to featuring Paleo-Eskimo objects, MicroCosmos also includes two storytelling dance masks made by the Yup’ik people in the late nineteenth century. The dances of the Yup’ik—descendants of the Old Bering Sea cultures—characteristically celebrate seasonal activities such as hunting; the masks for these dances are created in pairs to express dualities such as summer and winter, predator and prey, or steadfastness and trickery. Over the years, many of these pairs have been separated. The two masks in MicroCosmos—one representing a wolf and the other its prey, a caribou—will be reunited at the Menil for the first time in almost a hundred years.

MicroCosmos: Details from the Carpenter Collection of Artic Art is generously supported by Clare Casademont and Michael Metz, Anne and Bill Stewart, and the City of Houston. 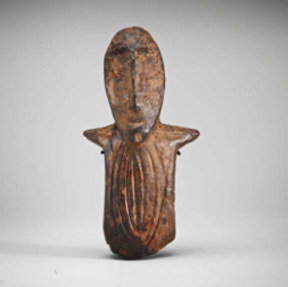