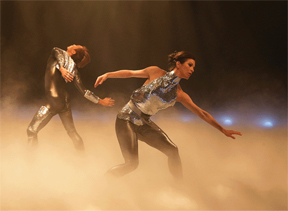 In one of more than 25 events this fall, choreographer/dancer Silas Riener will explore the potential of dance in describing “things.” Based on word histories, personal histories, and translational acts in poet, translator, and essayist Anne Carson’s work, Riener will resist the linguistic impetus to name in the effort to describe through the articulation of his body.

As part of EMPAC’s artist-in-residence program, designed for extensive artistic and technological research and development, Riener is in residence with choreographer Rashaun Mitchell to work on a new stereoscopic film and accompanying performance with artist Charles Atlas, a pioneer of the synthesis of technology and performance. It is exactly this space of convergence between disciplines and languages that characterizes the fall 2015 program at EMPAC. Spanning time-based visual art, music, sound, dance, moving image, and performance, few of the season’s programs find easy categorization.

The season’s performances start with Ant Hampton’s The Extra People, an interactive performance that relies on sonic instructions delivered to the audience-turned-actors through headphones. Italian collective Flatform will manipulate moving images and light to “see through” a static understanding of landscape, and Jennifer West will present an evening of “unabashed film love” with Los Angeles-based writer and curator Michael Ned Holte. Elizabeth Orr’s Mount Rushmore will render the plight of a park ranger, inundated with alarmist political email, in live action and animation; and during an EMPAC residency with Rensselaer professor and acclaimed composer Pauline Oliveros, Tarek Atoui will stage a performance and workshop to explore our range of listening abilities beyond simple auditory perception.

Mark Fell will debut his multi-genre performance Recursive Frame Analysis; Canadian sound artist France Jobin will treat the Concert Hall with a complex array of loudspeakers for a new multi-channel composition; electronic musician Oneohtrix Point Never will premiere his new show for stage; and electronic beatmakers vhvl, Daedelus and Ikonika will take over the building. Tim Hecker returns to EMPAC after recording parts of his breakout album Virgins in the Concert Hall to develop a new performance combining sound and light. Electronic composer Holly Herndon will create and present new work, while jazz and metal virtuosity collide as guitarists Mary Halvorson and Colin Marston share a double-bill.