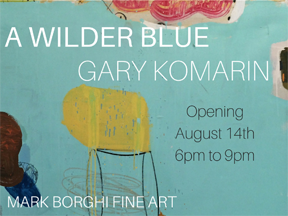 “Seemingly imprecise in their imagery, austere in palette, self-absorbed in feeling, their surfaces gritty and uningratiating, they can nevertheless become eloquent, for those patient enough to give them time.”
Barry Schwabsky, The New York Times

“Komarin gets paintings that vibrate with historical memory, echoing such things such as Matisse’s driest most empty pictures, Robert Motherwell’s spare abstractions of the 1970’s, or the early New Mexico and Berkeley paintings of Richard Diebenkorn.”
Kenneth Baker, San Francisco Chronicle