“Le Onde: Waves of Italian Influence (1914–1971)” runs Aug. 22–Jan. 3, 2016, at the Smithsonian’s Hirshhorn Museum and Sculpture Garden. This exhibition of nearly 20 works from the museum’s collection follows Italian contributions to the transnational evolution of abstraction, through movements and tendencies such as futurism, spatialism, op art and kinetic art.

The exhibition includes several works that have been exhibited only rarely or not at all since entering the collection. Among those that have not been on view since the Hirshhorn’s inaugural exhibition in 1974–1975 are works by Zero group founder Heinz Mack, French op artist Yvaral and Italian painter Carlo Battaglia and several works by Italian artist Enrico Castellani.

“Joseph H. Hirshhorn was a visionary collector whose generosity made possible a museum
of modern and contemporary art on the National Mall,” said Melissa Chiu, director of the
museum. “This exhibition celebrates his legacy and underscores his commitment to Italian
art.”
“The Embassy of Italy in Washington is proud to be supporting this exhibition,” said Claudio
Bisogniero, Italy’s ambassador to the United States. “For centuries, Italian artists have
been cultural innovators whose ideas have reverberated around the world. ‘Le Onde’ sheds
light on their contributions in the 20th century.” 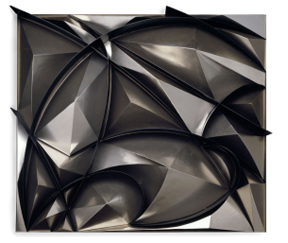 A pivotal figure in the exhibition is Lucio Fontana, who was born in Argentina to Italian
parents and divided his career between the two countries. “The pursuit of art forms that
embraced the energy and ideas of a technological age was an international phenomenon,
Smithsonian Institution Hirshhorn Museum and Sculpture Garden
MRC 350 PO Box 37012 Washington DC 20013-7012
Telephone 202.633.1618 Fax 202.633.8796
Independence Avenue at Seventh Street SW,Washington DC