Img Courtesy of the Artist and ArtSlant

Finally Marbella has an art fair that puts it on the European art fair map. It’s exciting to see the Palacio de Congresos turned into an exhibition space for top galleries and their artists from Spain, Portugal, Italy, the UK, the USA and parts of South America. On Day One, there was an atmosphere of enthusiasm from exhibitors and guests alike.

I asked Joel Kuennan, the Chief Operating Officer and Senior Editor of ArtSlant what had encouraged them to attend Art Marbella and he replied that “the enthusiasm of Alejandro Zaia, the founder of Art Marbella, for the project” totally sold them on bringing the work of Brett Day Windham to the show. ArtSlant is not a bricks and mortar gallery, it is a global gallery and worlwide online art resource. Brett Day Windham is a British-born artist and American-educated artist who is well establish on the U.S. and European art scenes.

The work ArtSlant brought to Marbella is a suite of works including a wall hanging, a map and eight collages. Brett created these while on an ArtSlant/Georgia Fee residency in Paris during January to March of 2015. She based the project on the archetype of Le Flâneur, the character so beloved by French poet Baudelaire, who wanders the streets of Paris, dressed up, or dandified as we might also put it.

She adopted the lifestyle of this ‘gentleman wanderer’ and walked around Paris collecting items that she cleaned then sewed into the large wall hanging, as seen in the illustration. She also created a color-coded map to accompany the wall hanging and this traces the lines of her walks around the 20 arrondissements and connects them through color to her found objects. She was there during the Charlie Hebdo tragedy and a yellow paper hand saying “Tous Charlie” stands out in the yellow section of her tapestry. It is a profoundly personal journey, and yet it also shows how fragments of strangers’ lives can become part of our story. Her 18 collages are created from a variety of materials, including Parisian magazines, and were inspired by women she saw on her walks. Each one is named for the neighborhood where she saw the woman. In some way this woman has become the symbol of her part of Paris, in a way that is reminiscent of Marianne, who is the symbol of Liberty and the French Republic.

Brett Day Windham is just one of the exciting artists at Art Marbella, and I’ll be bringing a focus on a range of vastly different artists over the next few days. As Alejandro Zaia, the Argentinian founder of Art Marbella, and also the founder of Pinta London, says “Marbella is the hottest spot in the European summer.” Hopefully it will also become “a premiere stop in the international cultural calendar.”

*Eleanor McKenzie will be writing an overview of the Art Marbella fair in the 25th Anniversary edition of Art of the Times.

Courtesy of the Artist and ArtSlant 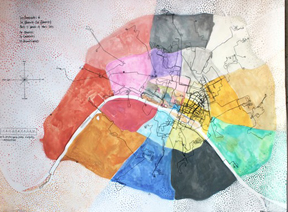 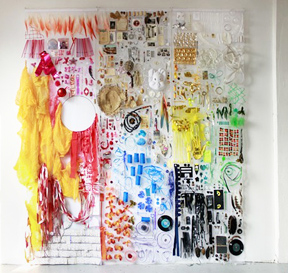