From October 2015 until January 2016
Mayoral will present an exceptional exhibition Master at metamorphosis of the artist in Barcelona showing an outstanding piece titled Anatomies from 1937. This artwork has been hidden for a long time, twenty-five years, and Mayoral will uncovered it and will bring it to light in October.

The exhibition, curated by Ricard Mas, curator and art critic specialized in Dalí, will put together this unique masterpiece with another thirty artworks among which there are: canvas, watercolors, collages, drawings and sculptures.

This show will include interesting rare paintings such as L’horta des Llaner from 1921, when Dalí was seventeen years old; he painted this work that represents his parents’ home in Cadaqués, well-known as his most inspirational village.

As well as, a very interesting selection of six Fashion Design drawings that the artist did on 1965. Dalí reached an agreement with the Wisconsin clothing manufacturer Jack A. Winter to design a line of clothing that would include beach, and swimwear, sportswear, and night and homewear for Autumn 1965, and then to show his designs in a travelling exhibition. The models were displayed in Paris that same year, but none of them were ever mass-produced.

“After important Dalí’s shows in prestigious important museums around the world like (Centre Pompidou París, Instituto Tomie Othake São Paulo, Centro Cultural do Banco do Brasil Rio de Janeiro, Museo Reina Sofía Madrid) and its successful public assistance, as well as his most important auction sales in these last five years, we are glad to present this international and powerful exhibition in Barcelona, one of our locations.” affirms Jordi Mayoral gallery’s Director.

This exhibition will be held in collaboration with Descharnes family, The Dalí Museum in Florida and friends of the artist.
ABOUT MAYORAL
Mayoral represents the most important Modern and Postwar artists of Barcelona (Dalí, Miró, Picasso, Tàpies, Ponç, etc.). Our aim is to promote the work by the artists from our country.
The gallery operates worldwide through prestigious international art fairs like: Masterpiece and PAD in London, The Armory Show in New York, Zona MACO in Mexico, SP-Arte in Sao Paulo; and has a strong professional relationship with the most qualified collectors, galleries and museums, such as: MoMA, Museu Picasso, Museo Thyssen, Fundació Joan Miró. Every show is commissioned in close relation with the foundation that represents the artist and documented by a trilingual catalogue published by the gallery.
Mayoral is one of the leading galleries of the work of Dalí and contributes to the circulation, the knowledge and the valuation on the market. The gallery works in collaboration with the families of the artists in order to ensure their legacy.
Mayoral have two art spaces; one located in Barcelona and the other one, an impressive building of 2.800 sqm. inaugurated in 2014, in Verdú, near Barcelona.
From October 2015 until January 2016 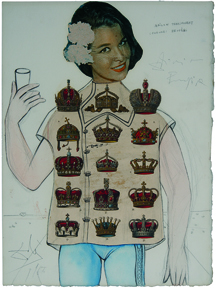