The exhibition opens with Rebecca Baumann and Brendan Van Hek’s collaborative work Untitled (2015), a minimal set of three mirrored acrylic panels, tinted in CMY primary colors (cyan, magenta, and yellow) and mounted in aluminum frames. Though static and flat, the work positions the visitor as a performer-spectator in a room of mirrors, in which movement and reflection, light and color, orchestrate an altered perception of space. The panels create a trompe-l’oeil effect: the white, neutrally lit gallery transforms into a cold blue, warm pink, or garish yellow room respectively, while the visual combination of panels results in mixtures of red, blue, and green. But despite its attractive color and sense of play, the installation is only fleetingly captivating, leaving little impression of the experience on the viewer.

Upstairs the atmosphere is more seductive, with works that engage the transitory nature of perception with more experimental and symbolic approaches. Particle Wave (2013), by Australian artist Grant Stevens, is made up of six appealing lenticular prints that alternate between two colors each, covering a spectrum of six tones—yellow, orange, magenta, violet, blue, and green—only fully captured when viewed from different angles. The series, which refers to the elusive physical nature of light, engages the body of the viewer through a hypnotic and unsteady movement.

On an adjoining wall are two intriguing works by Berlin-based New Zealand artist Alicia Frankovich. Becoming Public: Actor (2015) is a framed photograph installed as if balancing at a 40-degree angle from the wall. It depicts a body in a static position of equilibrium—with heels up and knees slightly bent—backgrounded by a gradient of dark purple to light pink. Next to this is Frankovich’s The Female has Undergone Several Manifestations (2015), a diaphanous curtain of the same color gradient; it hangs from a ribbon, dancing to the rhythm of a soft breeze produced by a small fan on the floor. Intimate but autonomous, these works—connected by their chromatically matching palettes, whose gradual movement from one color to the other perhaps indicates an intensity of motion—appear as translations of an action into an object or vice versa. This substitution blurs the boundaries between subject and object, proposing two apparently antagonist entities as inherently linked by a performative nature. The viewer, prompted by the connection between the two pieces, can envision the motion of the body in the photograph, and with it, a narrative.

In the same room is a work by Bauhaus instructor László Moholy-Nagy, who considered “light as the matrix of art.”(1) His seminal kinetic sculpture Light Space Modulator (1922–1930), a pioneer device for creating plays of light and movement, is composed of bulbs, glass, steel, aluminum, wood, and plastic. In this exhibition, a digitized version of the black-and-white film documenting the continual motion of the modulator, A Light-play: Black, White, Grey (c. 1926), screens on a wall-mounted monitor. In the film, as the modulator moves, its variously textured materials—many of which are transparent or translucent—compose a beautiful light show on blank white walls. The work stands as one of the first attempts to capture light and movement in space from a variety of viewpoints.

Meanwhile, the third and last room of the show features a work by Len Lye, a significant twentieth-century New Zealand artist who lived in London and New York, making contributions to the development of experimental filmmaking and kinetic sculpture. Considered to be one of the most influential animation films in history, A Colour Box (1935), also shown in a digital version on a wall-mounted monitor, is a painting on celluloid in which multi-colored and multi-layered abstract imagery—squares, grids, circles, organic forms, and text—blink and dance to the polyrhythmic “La Belle Creole,” a beguine by Don Baretto and his Cuban Orchestra. This film, like the entire exhibition, has a joyful, atemporal tone that emerges through the combination of a diversity of forms, movements, and rhythms.

Overall, “In Motion” is a likeable show that comingles historical and contemporary works with respect to their treatment of light and motion, in which possibilities of color, reflection, and transparency are tested. Lye’s and Frankovich’s works allude to dance, applying color to translucent, animated materials. Baumann and Van Hek’s work, as well as Moholy-Nagy’s, conveys dynamic possibilities in the interplay of objects, light, and movement, creating camera-like effects. Indeed, artists’ fascination with experimentation in mobility and chromaticity is a constant. “In Motion” is an example of a commercial gallery channeling substantial connections though works that illuminate the historical dimension of art.

Claudia Arozqueta is an independent arts writer and curator. She is co-founder and curator of the arts project Modelab. 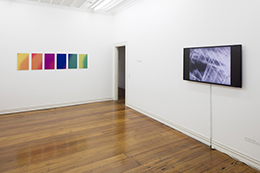