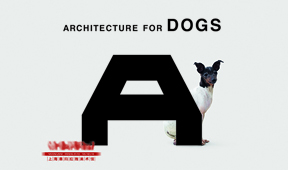 Since its launch, Architecture for Dogs has attracted wide attention among not only pet owners but also people taking an interest in design, architecture and art in general. According to curator Kenya Hara, “Practically everybody on earth is familiar with dogs and has some interest in them. The ‘dog’ represents a universal and broad-ranging theme.” Architecture for Dogs is not merely newly designed kennels. By designing architectural environments that would change the way human interact with their pet dogs, the exhibition intends to inspire people to take a new and different perspective and to ponder on questions such as, “If we were to imagine an environment based on the scale of dogs, what would it be like?”

In addition to a new addition by renowned Chinese architect Yansong Ma, which will be unveiled for the first time at this edition of Architecture for Dogs, two other highlights will also make this the most-anticipated exhibition in town. First, an enlarged version of “D-Tunnel,” designed by Kenya Hara, will make its debut in Shanghai. Visitors can walk into the space and get a chance to observe the surrounding world from a dog’s perspective. The other highlight will be the “Puppy Park,” a designated space right outside the gallery space in which dogs can have a chance to play with the “houses” designed for them.