Spaces is a feature of art-agenda that proposes a thematic examination of galleries based on the analysis of their physical and spatial configurations. Every two months, art-agenda publishes a new reflection on the spatial characteristics of galleries, their architecture, identity, and relation with their historical and geographical context.
The second feature of Spaces focuses on the confluence of domestic and exhibition environments.

In the first feature in art-agenda’s Spaces series, Chris Sharp enumerated the various species of apartment gallery, a family of spaces that he described as having evolved in contradistinction to the white cube. Sharp’s analysis was made largely along architectural—and thus stylistic and perceptual—lines. Wainscoting, paneling, and cabinetry are all pertinent identifiers of the apartment gallery, unless, as Sharp puts it, the room as been “white-cubified.”

Before reading his piece, I myself had been reflecting on the growing number of commercial galleries that are operated from dealers’ homes. My interest, however, was quite different to Sharp’s. What did it mean, I had begun to wonder, when the proprietor of a gallery actually lived in (or above) the space where they did business? Under what circumstances can art and life, commerce and domesticity, productively exist under the same roof?

On a recent visit to the uptown (and original) premises of Salon 94, the New York Gallery that opened in 2003 and which now has additional spaces on the Bowery and Lower East Side, I could hear owner Jeanne Greenberg Rohatyn’s daughter having a music lesson upstairs. Greenberg Rohatyn juggles her roles as a mother and a wife, a business owner and a socialite. Salon 94’s name connects it both to a venerable tradition of collectors, dealers, and aesthetes hosting salons in their homes, and to a much newer tendency amongst young commercial galleries to foster a sense of intellectual exchange where ordinarily one might expect the exchanges to be mainly financial.

The Rafael Viñoly-redesigned townhouse on 94th Street also brings to mind similarly grand buildings that incorporate galleries in other cities—Anthony Meier Fine Arts in San Francisco, for instance, which occupies the ground floor of a 1911 townhouse designed by Willis Jefferson Polk, or Domo Baal in London, which is situated in a building from 1735, a renovated former lawyers’ chambers, in which the gallerist also lives. In 2006 Franco Noero acquired the extraordinary building known as the Fetta di polenta [slice of polenta]—a thin, freestanding wedge built in 1840—and began to restore it. Leaving his previous two spaces, he opened it as his main Turin gallery in 2008. He and his wife moved into the upper three of the building’s nine floors partly to save on rent, and partly because they were attracted to its radical architecture. During the five years that the gallery’s artists devised exhibitions for the space (today only two floors are given over to private viewing rooms) the Noeros were able to retain their privacy thanks to thoughtfully placed doors that separated one floor from another.

On Los Angeles’ Westside—in a largely Persian neighborhood not known for its contemporary art scene—Jay Ezra Nayssan runs the gallery Del Vaz Projects in his modern apartment. Originally a curator and a collector, Nayssan opened the gallery in 2014 because he had lost patience with the postponement of a show he had curated for another gallery. Instead, he installed it in his own home. He says he was inspired by the Los Angeles-based artist and dealer Eve Fowler, who runs the itinerant Artist Curated Projects primarily from her living room. “Eve is our Gertrude Stein,” Nayssan says, referring to the salon-like atmosphere that Fowler cultivates.

The Farsi phrase dast-o-del vaz, from which the gallery takes its name, means “open hearted” and “open handed.” Nayssan goes to great lengths to make visitors welcome, receiving them at his dining table and serving cardamom tea, nuts, and dates. The performance of hosting, of enchanting one’s guests, he says, is “the greatest cultural practice in Iranian culture.” This intimacy in the gallery between the host and the visitor, the curator and the viewer, or the dealer and the collector, encourages a much freer—and, many dealers would argue, richer—interaction.

In galleries such as Del Vaz Projects, the separation between public and private is intriguingly indistinct. At openings, Nayssan says, visitors often let themselves into his bedroom and sprawl on his bed. His personal collection is installed throughout the apartment, and although he distinguishes between his curatorial projects, which reflect his “interests,” and the works that he owns, which reflect his “taste,” he wants visitors to look at both. Since Del Vaz has no fixed roster of represented artists, he is happy to broker sales for any of the artists he supports. The curated exhibitions, he says, are what brings people to the gallery—”the bait”—but his collection, his furniture and decorative work, and his personal artworks are “what hook people in.”

Further east in Los Angeles, in the residential Harvard Heights neighborhood south of Koreatown, Ben Echeverria runs the gallery Reserve Ames from his 1906 Craftsman Home. When, in 2013, his landlords offered him a raw wooden shed behind the house as a studio, he asked them if he could instead use it to mount exhibitions of work by others. His first show, of paintings by Clare Gill, was reviewed in Artforum, and Reserve Ames has since attracted more critical and commercial attention than he ever expected. (The gallery’s name, a deliberate misspelling of “reserve aims,” was from the outset a declaration of Echeverria’s uncertain ambitions for the space.) He has since presented exhibitions by Devendra Banhart, Michael E. Smith, Jenny Monick & Gedi Sibony, and Amy Granat; many of these installations have spread into the main house’s laundry room, toilet, upstairs bathroom, and even Echeverria’s own bedroom.

Echeverria cites the artist and curator Michelle Grabner—who has run a gallery called The Suburban from her garage in Oak Park, Illinois, since 1999—as a major influence. Relatively new to Los Angeles, he was not at the time of his gallery’s opening aware of other importance precedents in the city, including Paradise Garage, which artists Pentti Monkkonen and Liz Craft opened in 2012 in another shed-cum-garage beside their family home in Venice. (On April 11 this year, Oscar Tuazon presented the last ever show at Paradise Garage—a performance that involved him tearing down the wooden structure with a winch.) Unlike the civilized experience of Del Vaz Projects, Echeverria jokingly describes openings at Reserve Ames “like the parking lot at a Grateful Dead concert.” The gallery is “connected to the ground, to the dirt.”

Nevertheless, Echeverria has found himself playing host to art world power brokers and high-level collectors. The peculiar dynamic of welcoming someone into a domestic space (complete with clutter and cats) neutralizes the otherwise imbalanced power dynamic, he says. Echeverria even reflects that there is something feminist in the maternal aspects of his role as a host; as a curator and an artist he is interested in the different kinds of transaction that can take place in these circumstances. Could this intimate, personal way of presenting an exhibition be seen as a successor to the critically-embattled position of the curator-as-author? Although Echeverria’s handling of others’ artwork is never heavy-handed or oppressive, his physical presence inevitably filters our experience of the art he shows. 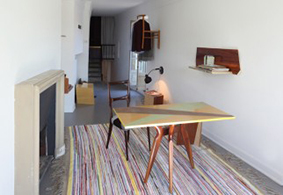 worked in a conventional commercial gallery before striking out on his own as a dealer. Park View, the gallery that he opened in 2014, occupies most of the small upper-story Los Angeles apartment where he lives. Unlike Del Vaz and Reserve Ames, which are accessible by appointment only, Soto keeps office hours Wednesday through Saturday, and he has recently taken on an intern. Boundaries, however, are fuzzy to the point of invisibility; on my most recent visit to the gallery, passing through the kitchen in order to view a work installed in Soto’s bedroom, I pretended not to see the intern working at a laptop from the bed.

For Soto, surrendering his home to his business was a pragmatic decision as much as an ideological one. He says he is not materialistic, so emptying his living area, closet, and most of his bedroom of belongings was not difficult. He talks about “creating a small footprint” so that emerging artists are under the least possible amount of commercial pressure and have the greatest possible degree of freedom. And, most revealingly, he expresses the desire to “be able to do as many art fairs as possible.” For Soto as much as for an established dealer like Greenberg Rohatyn, fairs are the site of most of their business. Combined with the growing potential for sales to take place over the internet, this might signal a sea change in the function of commercial exhibition spaces. In the second decade of the twenty-first century the bricks-and-mortar gallery is, perhaps, freed up to be a social and intellectual space, while commerce has been displaced elsewhere.

Jonathan Griffin is a freelance writer based in Los Angeles and a contributing editor for frieze magazine.