The Arts Catalyst is delighted to announce a new commission by Ariel Guzik for Edinburgh Art Festival 2015. Holoturian is an underwater resonance instrument designed by Guzik to communicate with whales and dolphins in the deep seas.

For the last 10 years, the artist, musician, illustrator and inventor Ariel Guzik has searched for a way to communicate with ocean-dwelling creatures. Guzik’s project has encompassed the creation of underwater instruments, expeditions to contact whales and dolphins off the coasts of Baja California, Costa Rica and Scotland, sound recordings, and numerous fantastical drawings of this cetacean civilisation and underwater ships and gardens.

Guzik’s extraordinary vision is to build a manned underwater ship—the Narcisa—with the intention of enabling encounters between humans and cetaceans as inhabitants of parallel civilisations, free from hierarchies or intentions of domination or subordination, and devoid of utilitarian or practical research interests.

Commissioned by The Arts Catalyst and Edinburgh Art Festival, his new project brings the artist closer to his goal. For this show, his first exhibition in the UK, Guzik is constructing a beautiful capsule, the Holoturian, designed to send a living plant and a string instrument for a period of time into the depths of the sea. Imagined and re-imagined in extraordinary drawings made by Guzik over the past decade, this ship has instrumentation, which expresses life, space, harmony and brightness as primary messages, and is dedicated to sperm whales and other deep ocean creatures.

Ariel Guzik is supported by Wellcome Trust, British Council, EventScotland, Museums Galleries Edinburgh, Arts Council England and the following Mexican institutions, as part of The Year of Mexico in the UK 2015: the Ministry of Foreign Affairs (SRE) through the Mexican Agency of International Cooperation for Development (AMEXCID), the National Council for Culture and the Arts (CONACULTA), the National Institute of Fine Arts 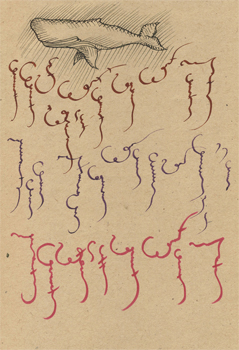 The Arts Catalyst works with exceptional contemporary artists and scientists, commissioning extraordinary art projects that spark dynamic conversations about our changing world. It seeks new ways to involve artists, scientists and the wider public in a discourse about the impact of science in society and through its exhibitions and events enables people to have distinctive, thought-provoking experiences.