The soothing whispers of the song drift beneath the shift and chatter of the opening party like a lavender mist, velvety fingers. The next door gallery was open but not opening. Empty, its harsh white lights beam like a drugstore. But here, the light is softer. Everything is softer.

Ooh baby / yes ooh baby / When we’re out in the moonlight / Looking up on the stars above / Feels so good when I’m near you / Holding hands and making love.

“Baby” by Donnie and Joe Emerson isn’t officially part of Sojourner Truth Parsons’ first solo exhibition in Los Angeles (itself only the second show at the newly-opened Phil Gallery). But, hearing it on repeat during the opening, its sad longing and gentle desires reveal her aesthetic too perfectly to ignore, soundly shaping the various collage paintings, the ebbing video, and curious sculptures. Written and recorded by the teenage Emerson brothers on a farm in 1979, their record sold only a few copies, and its expense almost bankrupted their family. A collector purchased a thrift store copy in 2008 and, thirty years later, Dreamin’ Wild (1979) became an underground sensation covered by LA cult hero Ariel Pink, who described “Baby” as “pure atmosphere.” And it is. A teenage boy’s voice moans sweet nothings to the simplest of rhythms. Sad without being dark, haunting but only a little mournful, innocence with a first taste of sensuality.

Pure atmosphere, “I Got Allergies” is hardly teen naïve. But even experienced, it’s still somehow pure. In the middle of the room cluster giant white grapes with a popsicle-handle angling out (it’s my life, 2015). Made roughly from paper collage and sand, and embedded mysteriously here and there with rhinestones, the popsicle has melted a perfect pool of white paint onto the floor. The grapes’ chewed skins look a bit gross, but the mâchéd mass also holds a gentle charm. A fantasy treat dropped by a giant child, a Claes Oldenburg relic from “The Store” (1961) that couldn’t take the summer heat.

A few feet away, a long screen tucked into the corner plays a video of a single rose drifting slowly in the cool chemical blue of a swimming pool (Untitled, 2015). Collage paintings angle and swell off the walls with tertiary colors and scrappy material showing fractured scenes, pieced out and layered in mysterious ways. Two floating fingers with long red nails seem at a glance to hold a cigarette in tuesday morning (2015)—but the fingers are deep lavender and unattached to any hand, while the cigarette isn’t between the fingers but floating behind them. Hands appear twice more, with different flesh and polishes. In for women’s eyes only (2015), white fingers with pink nails wiggle freely across the surface, just a tease of John Wesley’s sexy pop but never aspiring to the crisp, flat cleanliness of his playful planes of color. Protruding and recessed, sometimes smooth though usually messy with texture, altogether composed, Parsons’ paintings possess a loose freedom and carefree confidence.

Walking past the crowd into the back room, an ice sculpture carved into the shape of poodle stands with its feet strewn with paper roses. Heart is Melting Ice (2015) is a collaboration between Parsons and Davida Nemeroff, who is exhibiting in the gallery’s bathroom. Someone tells me I can touch it. Rivulets of chill water melt away as I slope my hands over the frozen surface, crystalline and temporary. The flowers lying at the puppy’s paws emote sentimentality but are hardly cloying. The Emerson brothers’ song finales. I glance over to see a cell phone hooked into speakers with the tune displayed on its screen. Drying off dripping fingers on jeans, I press repeat and walk away. The boys’ voices follow me into the night.

Andrew Berardini is a writer in Los Angeles. He’s recently the co-recipient of the Curatorial Residency Grant from 221A in Vancouver. 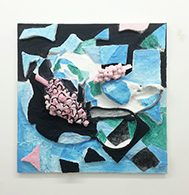