“For the artists, in their restless journeys to create new original works, the festival has become a base camp from which to launch. And for audiences, it’s become a unique home base at which to put their fingers on the pulse of cutting-edge contemporary performance.” — LA Times

Each summer REDCAT’s annual New Original Works (NOW) Festival gives audiences a chance to experience the premiere of a wide range of new works created by celebrated Los Angeles-based world class and emerging voices. REDCAT transforms the theater into an artist-driven creative laboratory for artist projects with an emphasis on interdisciplinary collaborative teams. NOW has become an important catalyst for artists launching new ideas while bringing audiences an inspiring view of the next generation of artists among us. Over its twelve year history the program has launched more than 100 new productions.

REDCAT Executive Director Mark Murphy, who oversees the annual festival together with Programs Manager Edgar Miramontes, describes the summer festival as “a vital initiative for experimentation and development that nurtures the creation of nine new interdisciplinary performances. The artistic teams are encouraged to take risks as they blur the distinctions between traditional artistic disciplines to devise new forms — and it is always fun to experience the results.” Miramontes adds, “The Festival creates opportunities for the artists that are all too rare. There is a great need for infrastructure to develop new performances, especially in the dance community, so NOW tries to address that need each summer.”

Evocative projections and landscapes saturate the stage to frame the nuanced movements of co-choreographers Nguy?n and Gillespie, who traverse the intersection of dance, theater, and new media in collaboration with video artist and astrophysicist Fabio Altenbach. Live video is manipulated to explore themes of home and dislocation in this rich work developed with the Beijing International Dance Festival.

Contrapuntal percussive dance and stirring vocalizations come together in this highly rhythmic performance blending Kathak, Bharatanatyam and contemporary dance forms. Enhanced by live music from bassist Mark Guttierrez, Gandhi and Mohanty investigate issues of personal justice and identity, the imperative of breath, and the repercussions of race-fueled violence.

Channeling the passion of an enigmatic pop idol, the multidisciplinary team of composer Jherek Bischoff, vocalist/co-composer Zac Pennington, and choreographer Steven Reker, transcend the concert form to explore the incongruities of pop personae — performer as icon, androgyne, messiah, and martyr — in a lush, four-song suite interpreted with a string quartet, vocals and movement.

With a transfixing level of concentration and a graceful and gripping theatrical presence, Sweden’s Stina Ahlberg commands and deserves attention as she makes her choreographic debut in Los Angeles, the internationally-known dance innovator’s new home. Inspired by rituals, myths and icons of both Asia and Scandinavia, Ahlberg subtly evokes demons, Goddesses and timeless legends.

In dark shadows and shifting light, five performers take on a mysterious quality, enhanced by an immersive and sometimes jarring sound score by multi-media composer Mint Park, in this collaboration with choreographer Hee-Eun Jeong. The high-velocity movement has both rhythmic and primitive touches, while also reflecting the interest both women have for the cultures of film and fashion.

The rants and ramblings of André Breton and the Surrealists are re-imagined by director Robert Cucuzza with a focus on disturbingly sexist transcripts that read like nasty comments from internet trolls. Set to a live Gypsy Jazz score, this twisted journey through Breton’s subconscious is staged with a mostly female cast to reinterpret the crass material.

With glitter in their eyes and fervor in their hearts, Cassandra is a “feminist art-rock power-ballad soul-pop project” named after the Greek mythological prophetess and the iconic Wayne’s World frontwoman. In this epic song cycle rich with elements of spectacle, Cassandra confronts the silence around violence, and the discredited voice.

Takao Kawaguchi, Jonathan Hall and Deanna Erdmann Touch of the Other

An intimate sense of danger and desire is evoked with images and seductive movement, when choreographer Kawaguchi (last seen at REDCAT with Tokyo collective ‘dumb type’) joins writer Hall and artist Erdmann to explore the usually shrouded topic of male-male intimacy in public places, as documented in the 60’s by L. A. sociologist Laud Humphrey, whose research is stored at USC’s One Archives.

Five virtuosic performers unleash their inner punk to shock the competitive spirits that propel their ambitions and to confront the flitting nature of success (and mysterious powers of failure). With multiple projections by Cari Ann Shim Sham and a powerful score by Jeepneys, Trophy fractures recognizable dance motifs into mischievous fragments, igniting disjointed new pleasures.

Seating is general admission and tickets are available for purchase in person at REDCAT Box Office, by phone at 213-237-2800, or online at redcat.org.

REDCAT’s Box Office is open Tuesdays through Saturdays from noon until 6 pm, or two hours prior to curtain. Group, member, student and CalArts faculty/staff discounts available.

ABOUT REDCAT | THE ROY AND EDNA DISNEY/CALARTS THEATER

REDCAT, CalArts’ downtown center for contemporary arts, presents a dynamic and international mix of innovative visual, performing and media arts year round. Located inside the iconic Walt Disney Concert Hall complex in downtown Los Angeles, REDCAT houses a theater, a gallery space and a lounge. Through performances, exhibitions, screenings, and literary events, REDCAT introduces diverse audiences, students and artists to the most influential developments in the arts from around the world, and gives artists in this region the creative support they need to achieve national and international stature. REDCAT continues the tradition of the California Institute of the Arts, its parent organization, by encouraging experimentation, discovery and lively civic discourse.

For current program and exhibition information call 213-237-2800 or visit www.redcat.org.

THE LOUNGE | Open to the public six days a week, the Lounge is a great place to spend an afternoon or grab a drink pre- and post-performance.

THE GALLERY | REDCAT’s Gallery presents five major exhibitions each year, and publishes artist books and catalogues. Admission to the Gallery is FREE.

Gallery Hours: Tuesdays–Sundays from noon until 6 pm and through intermission

THE THEATER | Tickets for programs held in the theater are available through the REDCAT Box Office, by phone 213-237-2800 or online at www.redcat.org. Group, member, student and CalArts faculty/staff discounts available. 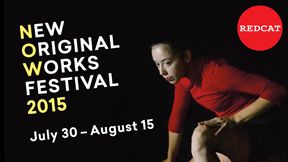