An art enthusiast and painter for over 20 years, Patrick Mancini began his career unofficially around 1992 after painting a few pieces for a Toys-for-Tots fundraiser in Newport, Rhode Island at which two of the pieces were purchased and the funds were donated to the charity. The interest demonstrated by the buyers at this event spawned the genesis for Patrick Mancini’s creative crusade to seamlessly blend his love for art and philanthropy. Influenced predominately by Cézanne and Van Gogh’s use of color and texture in their work, Mancini is an artist who focuses almost entirely on landscape pieces, and most recently, on seascape and beach scenes.
Mancini embraces the creative respite offered through his artwork. His work is quite diverse, marked by deviations in style, medium, and palette. Interestingly, nearly every piece that Mancini has produced was done just after the midnight hour during the winter months, when he believes he can best tap his creativity. Mancini tends to generally start his pieces with textured paper or canvas. When using pastels, Mancini moves directly to color and blending due to the nature of the materials, but when using oils, he prefers to set a baseline by creating a universal background color. Per Mancini, there can be a very significant difference in the creative outcome of each piece as pastels often reflect ambition and determination, while oils tend to be much more contemplative because of the time-to-canvas and the potential to think more broadly as the art progresses.
When asked to elaborate on the subject of his work, Patrick Mancini remarks, “None of my paintings are replications of actual places. They are all imagined, and that is what I think makes them profound and ultimately more captivating for my audiences. I would describe my work as “abstract impressionist” in the sense that color, texture and subjects tend to be in the impressionist family with some variations in abstract style and color.”

For more than a decade Mancini has served in a volunteer role as the President and Chairman of the Board for the New England Hemophilia Association. As a community leader and advocate for those affected by chronic illness, Mancini has experienced a fair amount of adversity in finding time for his art, but credits these experiences to his ability to create more complete, dynamic pieces in a resurgence of his artwork that he refers to as “second generation.” In light of the ongoing progression and advancement of treatments, Mancini believes his art post-2011, is more traumatic and complete, offering a depth of inspiration not available to him as a younger artist. Whenever possible, Mancini employs his artwork as a springboard to advocate, fundraise and raise awareness for bleeding disorders on both a local and national level. 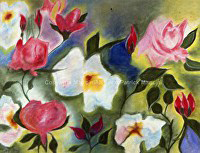