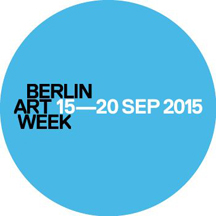 From 15 to 20 September 2015, Berlin will once again become the centre of the international art world. The fourth Berlin Art Week will entice collectors, key players in the art world, and all those interested in arts and culture to the German capital. The week will kick off on September 15 with a wide range of openings. They will include STADT/BILD (Image of a City), a cooperation of Berlinische Galerie, Deutsche Bank KunstHalle, KW Institute for Contemporary Art, and Nationalgalerie–Staatliche Museen zu Berlin.

The autumn of 2015 marks the second collaborative project between four of Berlin’s leading art institutions. Titled STADT/BILD (Image of a City), the project approaches the notion of “the city” as thematic cluster from various perspectives. The institutional structure and work processes of museums will be examined, urban developments will be addressed, as well as social, aesthetic, and cultural aspects relating to “the city.” Initiated and funded by the Berlin Senate, the joint project also marks the kick-off of Berlin Art Week 2015.

Architects Brandlhuber+ Hertweck, Mayfried will devise a spatial intervention in the Berlinische Galerie. The Dialogic City : Berlin wird Berlin sets out to question the museum as an institution: its acquisition policy, conditions of exhibiting, and various constraints. Xenopolis at the Deutsche Bank KunstHalle will focus on the city as a living organism that does not belong to anyone in particular. The city is understood as a free zone, an urban fabric defined by outsiders moving in. The “jungle” at the heart of the group exhibition Welcome to the Jungle at KW Institute for Contemporary Art serves as a desired imaginary space, symbolizing the subconscious, potentially dangerous counterpart of the controlled urban environment. The Nationalgalerie will present Allan Kaprow: Fluids, 1967 / 2015, a comprehensive reinvention of Allan Kaprow’s Happenings from 1967 in the public sphere. Berlin-based artists are invited to react to this process-based work; their versions of Fluids will appear in different locations around Berlin, on successive days, during the Berlin Art Week 2015.

The second edition of the POSITIONS BERLIN Art Fair takes place as a part of the Berlin Art Week, from 17 to 20 September. For this year’s edition, a central location has been found: the Arena Berlin. It was constructed in 1927, and at 100 meters in length and 70 meters wide, was at that time the largest cantilever hangar in Europe. The industrial building’s historical brick architecture provides a perfect setting for the growing art fair. The fair is independent of established categories and comprehensively represents the quality and currentness of the international art scene, inviting visitors to discover new art positions. This year the Landesverband der Berliner Galerien (LVBG) is celebrating its 20th anniversary, and will also be exhibiting in the Arena, together with POSITIONS BERLIN.

Programme highlights also include the Preis der Nationalgalerie 2015, which will be awarded to one of the four nominated artists: Christian Falsnaes, Florian Hecker, Anne Imhof and Slavs and Tatars at Hamburger Bahnhof; Extended Reality, Alicja Kwade’s solo show at the Haus am Waldsee; and Horizontal, an exhibition in Schinkel Pavillon featuring works from Paul McCarthy—as well as Ich kenne kein Weekend! The René Block Archive can be seen in Berlinische Galerie and Neuer Berliner Kunstverein. The exhibition Cindy Sherman: Works from the Olbricht Collection, on view at me Collectors Room, will feature some 60 photographs by the artist. The collection represents a striking survey of Sherman’s work, including works from almost all periods of her career, so that the resulting exhibition has the scope and character of a retrospective.

Berlin Art Week is pleased to host Talking Galleries (Barcelona) in Berlin for the first time. Two panel discussions will provide fascinating insights into the art system that is going through profound economical, technological and sociopolitical changes. Held as morning sessions, the format will appeal to art enthusiasts and professionals alike. It is an exciting addition to Berlin Art Week, creating a forum of debate at Station Berlin.

Berlin Art Week is made possible with the support of Berlin’s Senate Administration for Economic Affairs, Technology, and Research, and realized with the support of the Senate Chancellery–Cultural Affairs and Deutsche Bank. Coordination and communication by Kulturprojekte Berlin GmbH.

For more information, updates, and the programme, please visit www.berlinartweek.de.