MEXICO CITY — Facing the entrance, an unmarked metal door, of Anonymous Gallery are two photographic prints by Todd Eberle, each big, brilliantly colored and symmetrical — somewhere between a Rorschach image and the view inside a kaleidoscope.

One is a tangle of yolk-yellow parrot tulips with dark pink stripes, picked from Mr. Eberle’s garden in West Cornwall, Conn., and mirrored in such a way that the petals and stems create a complex pattern, evoking William Morris, the English designer, or something more primal: a beetle on its back; a woman, limbs akimbo.

The other is a picture of a galactic garden: a 2012 photograph beamed from the Hubble telescope that Mr. Eberle reworked — flipping and distorting the image and adding color — to produce a marbled burst of magenta, midnight blue and crimson that seems both to stretch from its dark center and suck the viewer in.

The prints are an opening statement for “Cosmos (heavens/earth),” Mr. Eberle’s solo show here that runs through Tuesday and comprises two series — still lifes of flowers (“earth”) and images created from Hubble pictures (“heavens”). The works will also form part of a group show, “Cornwall Bohemia,” at James Barron Art in Kent, Conn., through Aug. 3. 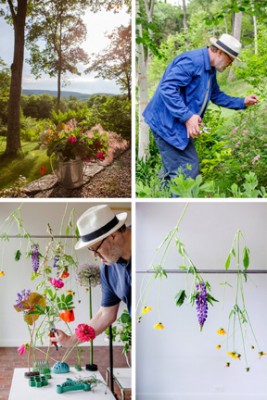