« Inveterate portraitist, Yves Marcellin challenges the concept of “photographic exactitude”. By enhancing his subjects, he takes this challenge further. An obligation of principle ? This enhancement is at the very least, evidence of the idolization that this mediterranean photographer avows for his female models in a constant and reiterated manner. Yves Marcellin does not produce, strictly speaking, simple “images” of his models, wether he presents them clothed or nude, from far or near, in a landscape or in a close-up. To capture, by means of the camera, their physiognomy in the banal fashion of a reproduction ? No. To go above and beyond realism, is for him a moral obligation. This man makes no secret of his fascination with extreme beauty. He exalts it. He has, clearly a taste for icons. » explains the French art critic Paul Ardenne.
The portrait, according to Marcellin, is like the writing of the apocryphal gospels. It is always the result of the work and the combination of elements.
« _Conceptual photographer, Yves Marcellin’s research and influence stem from a double provenance, one historical and one more recent. Like the pictorialists of a century ago, he treats each of his photographs like a painting. The manipulation of the colors, the optical palimpsests made by superimposition, the employment of certain speed effects or the displacement of signs in his photographs reveal straightforwardly the impulses of the painter in his pictorial intention. The “becoming like painting” of photography is not a fiction nor an aberration, but a logical evolution : one can photograph like one paints, definitively.
Second influence of which the images of Yves Marcellin bear witness : the trend of “art photography”, which affirmed itself as the end of the 20th century. This was a rejection of the obsession with objectivity and the conceptual photographers absorbed by the conquest of the “Candid Eye” or of the “Street Photography” which meant to show us the world as it really is, without being influenced by any subjective viewpoint of the image-taker… The “art photography”, on the other hand, inaugurates the regime of the composed image, not as a reflection mimicking the world but as phantasmagoria. This adopted regime is, in this case, that of the creation, pure and impure at the same time. Pure, because that wich counts is to arrive concretely at the dreamed-of image, in an antirealist or idealistic perspective. Impure because, refusing the impenetant insistance that photography be a “proof” (the “ça a été” of Roland Barthes), here we turn our back on the imperative to witness and report.
The portraits of Yves Marcellin, in sum total ? A libertarian game of enthrallment with the image of the body, in which the result is, often enchanting, and always: fascinating » concludes Paul Ardenne. 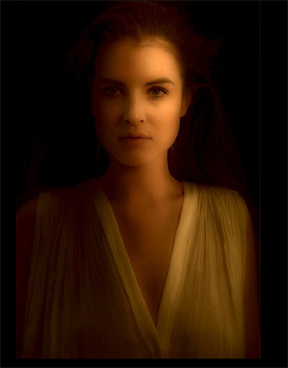