The third exhibition in the Museum of Arts and Design’s groundbreaking series exploring contemporary Native North American art, Changing Hands: Art Without Reservation 3 features approximately 70 artists from Northeastern and Southeastern United States and Canada, who represent a new generation of Native artists that utilize contemporary techniques, materials, aesthetics, and iconography in their art and design practice. Changing Hands 3 presents works created in the past seven years by Native artists in regions east of the Mississippi, including the Great Lakes, Woodlands, Northeast, Southeast, and up through the Canadian Sub Arctic, and recasts these works through the lens of contemporary art and design from around the globe. On view from June 26 through October 21, 2012 at MAD, the exhibition transcends ethnographic and anthropological interpretations and challenges preconceived notions and stereotypes of indigenous art and artists to effect a reevaluation of contemporary Native art in an international arena.

Changing Hands 3 features more than 130 works, ranging from site-specific installations and video to sculpture and jewelry—approximately 25 of which were designed and created specifically for the exhibition. Following its New York City premiere, the exhibition will travel to museums in the United States and Canada, including the Memorial Art Gallery at the University of Rochester in Rochester, NY, and the McMichael Collection in Ontario, Canada.

“The Changing Hands series has been groundbreaking in shedding new light on the vitality and variety of contemporary Native art—an artistic genre that has frequently been overlooked by the broader art world,” says Holly Hotchner, MAD’s Nanette L. Laitman Director. “MAD is committed to representing the artistic diversity of world cultures and revealing the transformative power of materials and innovative artistic processes. Changing Hands exemplifies the seamless merging of artistic disciplines, themes, and traditions that MAD is dedicated to bringing to the fore.”

Organized by guest curator Ellen Taubman in collaboration with MAD’s Chief Curator David McFadden, the works in the exhibition come from a broad cross-section of indigenous cultures, including Native Americans from the U.S., and First Nations, Metis and Inuit people from Canada. Featured artists are presented without tribal designations, however, and the exhibition is instead organized around the following three significant themes that illuminate artistic, intellectual, and cultural resonances among Native artists:

 “Evolution and Exploration” examines how Native artists are reinterpreting their cultural traditions through contemporary perspectives, and includes the work of scholar and beadwork artist Joe Baker, whose creative use of color and patterning in textiles is based on the complex floral and geometric elements that once decorated early bandolier bags among the Delaware and Southeastern people; performance and mixed media artist Barry Ace, who uses computer components in lieu of the more “traditional” glass trade beads identified with many Native groups; Jeremy Frey, whose innovative sculptural baskets reference early Maine basketry techniques; and Jamie Zane Smith, who has developed an entirely new language of ceramics through the study of prehistoric and proto-historic forms among the Wyandot tribe.

 “Natural Selection” features a group of artists whose works respond to and investigate nature through the lens of contemporary art, including Truman Lowe, whose dramatic and conceptual openwork sculptures are created from willow branches harvested by the artist; acclaimed sculptor and glass artist Robert Tannahill, who creates stylized “masks” that represent the interplay of natural wood forms and molten glass; and Frank Shebegaget, whose major installation, “Cell,” is constructed from hundreds of fine strands of fishing wire interspersed with hooks that create both a visceral and emotional impact.

 “De-Coding History/Historical Provocation” presents works that are often politically nuanced and contrast the realities of history with the mythology of cultural assimilation that has marginalized much indigenous art. Among the featured artists are Robert Houle, whose work addresses the disruption and dislocation of individuals, families, and often times, entire cultures as well as the public apology made by the Canadian government for the abuse of indigenous peoples in government residential schools. His installation, “Sandy Bay Residential School,” which is featured in the exhibition, recounts his experience at a residential school after being removed from his family at a very young age; mixed media artist Shan Goshon, whose featured woven basket is comprised of a photograph of Indian schoolchildren and adults at a typical boarding school, titled “Educational Genocide: The Legacy of the Carlisle Indian Boarding School;” and performance and installation artist Kent Monkman, who questions history, colonization, boundaries of identity, gender and more in a broad body of work, evidenced in this exhibition with a number of works, including the film “Shooting Geronimo,” which highlights the way Hollywood has caricatured indigenous people in film, and “Emergence of a Legend,” a series of five photographs which depict Monkman’s alter ego, Miss Chief, in various costumes that confront how Native Americans have been forced to perform their identity for other cultures, among other works.

“Changing Hands 3 provides audiences with a sensory experience of the complex, multilayered work of contemporary Native artists as they confront cultural expectations, reclaim lost traditions, and create a new identity for themselves shaped by historical, political, and personal circumstances,” says Ellen Taubman, Changing Hands curator. “Through an extraordinary melding of past and present, and direct opposition between stereotype and tradition, the Native artists featured in the exhibition confront what Native art has meant and what it means today.” 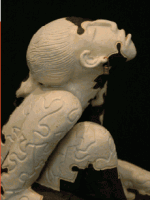 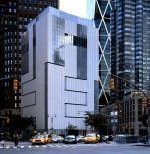