Returning to the Royal Room for the first time since 2007, Tom Wopat first came to public attention in the late-1970s as the freewheeling Luke Duke on the TV series The Dukes of Hazzard. In 1977, he made his Broadway debut in Cy Coleman’s I Love My Wife. Wopat went on to perform in the Tony Award–winning City of Angels and Guys and Dolls. He received a Tony nomination for creating the role of Frank Butler in the Broadway revival of Annie Get Your Gun, opposite Bernadette Peters. In 2008, Wopat returned to Broadway as Tom Hurley in A Catered Affair with Faith Prince and Harvey Fierstein. 2011 saw him again on Broadway starring as Frank Abagnale Sr. in the new adaptation of Catch Me If You Can. His TV credits include a leading role in Cybill, a recurring role on Home Improvement, the critically acclaimed NBC movie Just My Imagination, and most recently HBO’s Taking Chance alongside Kevin Bacon. Wopat has also become a successful recording artist with many albums to his credit, including A Little Bit Closer, Don’t Look Back, Learning to Love, and The Still of the Night. In 2005, he released Dissertation on the State of Bliss—featuring the music of Harold Arlen—and his most recent offering, Consider it Swung.

Reviews of Tom Wopat:
• Stephen Holden, The New York Times: “In a fundamental way, (Tom) Wopat is a keeper of the flame of the Sinatra saloon tradition. Like Sinatra he is not afraid to be tender and to bare his emotional vulnerability. At the same time, however, he is not a Sinatra imitator…he has a country singer’s relaxation.”
• Rex Reed, The New York Observer: Swarthy but cool, like a preppie rodeo cowboy with a tuxedo and a Rolex, Tom Wopat is so charismatic and versatile he can lock in a lyric and lasso an audience at the same time… With an appealing song list that ranges from Cy Coleman and the Beatles to Gershwin and Bobbie Gentry, he demonstrates with ease why he has become, with age and experience and a lot of good listening, what I call a category-defying performer capable of wearing many hats and tackling numerous trends, from country to jazz. He’s come a long way from The Dukes of Hazzard.”
• Cabaret Scenes: “How comfortable is Tom Wopat on a cabaret stage? Comfortable enough to pull out a guitar and start entertaining the audience fifteen minutes before his show was scheduled to start. Comfortable enough (to make) a cabaret feel almost like a living room… Tom Wopat is a jazz vocalist, and a darned good one.” 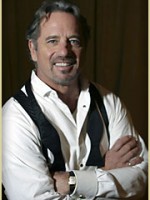