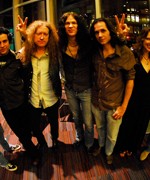 Delivering the “light and shade” that is the embodiment of “The Mighty
Zep,” Get The Led Out brings the essence of the recorded music of Led Zeppelin to the concert stage on Thursday, February 16 at 8 p.m. at the Sunrise Theatre (Fort Pierce), Friday, February 17 at 8 pm at The Plaza Live (Orlando) and Saturday, February 18 at 8pm at the Parker Playhouse (Fort Lauderdale). Playing the blues-soaked, groove-driven rock anthems with passion and fury along with offering intimate, sit-down acoustics, Get The Led Out re-creates Led Zeppelin’s early songs, as well as deeper cuts that Zeppelin hardly ever performed live.

Get The Led Out’s approach to their performance of this hallowed catalog is not unlike a classical performance. “Led Zeppelin are sort of the classical composers of the rock era,” says lead vocalist Paul Sinclair. “I believe 100 years from now they will be looked at as the Bach or Beethoven of our time. As cliché as it sounds, their music is timeless.”

The Philadelphia-based group consists of six accomplished musicians intent on delivering Led Zeppelin’s studio recordings with all the bells and whistles. Dubbed by the media as “The American Led Zeppelin,” Get The Led Out presents a more than two hour set that spans the mythic career of the legendary British super group. The group consists of Bassist Billy Childs & Drummer Adam Ferraioli of 80s American glam band Britny Fox
– Paul Hammond is a voting member of the National Association of Recording Arts & Science or “NARAS”, the organization that hosts the Grammy Awards
– Jimmy Marchiano has played in Columbia recording artist “Black Eyed Susan”, been managed by Gene Simmons and performed on the same bill as Guns N Roses.
– Paul Sinclair is a BMI affiliated songwriter & owns Fat City Studios in Philadelphia where he and Paul Hammond where their engineering, production and mastering credits can be found on national releases worldwide.

The Philadelphia Inquirer said “Not content to play an approximation of Zeppelin, Get the Led Out strives to re-create every last sonic detail the band committed to tape. Hammond handbuilt a ‘gizmotron’ to replicate certain sounds on ‘In the Evening,’ and went to great pains to harness the low-speed tape effects heard on ‘Whole Lotta Love.’ That’s as much a part of their quest as Robert Plant’s lyrics or Jimmy Page’s trail-blazing guitar, and given the complexity of Led Zeppelin recordings, it’s an endless one.”

SUNRISE THEATRE: Tickets are $29 and $35. Select your seat online at www.sunrisetheatre.com or order by phone at (772) 461-4884. The Sunrise Theatre is located at 117 South Second Street in Fort Pierce.

PLAZA THEATRE: Tickets are $24 and $34 and are available for purchase at the Plaza Theatre Monday-Friday 11 a.m. to 6 p.m. Select your seat online at www.plazaliveorlando.com or order by phone at (407) 228-1220. The Plaza Live is located at 425 North Bumby Avenue in Orlando.

Get the Led Out Led Zeppelin PARKER PLAYHO-- USE PLAZA THEATRE