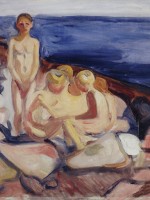 One hundred years ago, in 1912, an entire year before the Armory show that shook the art world and turned it forever on its ear, an exhibit of 165 pieces of contemporary Scandinavian art was held. It had paintings, sculptures, textiles and ceramics, that were unlike any works previously seen in this country. It was called “The Scandinavian Exhibition” and was considered to be truly radical. Last year, as part of its centennial celebration, the ASF, the American Scandinavian Foundation, reassembled many of the paintings from the 1912 exhibition, and added some additional works. “Luminous Modernism: Scandinavian Art Comes to America, 1912” provides a roadmap of how once-radical art morphs into the traditional over the course of a century.

The1912 survey of contemporary Danish, Norwegian, and Swedish painting traveled to Boston, Buffalo, Chicago, and Toledo following its debut in New York City. The exhibition had an enormous impact in and beyond the cities to which it traveled. It provided the first and most shocking glimpses for Americans of the paintings of Edvard Munch, an artist whose influence still resonates among contemporary artists, and strongly influenced such artists as Marsden Hartley.  Munch’s “Bathing Boys” (1904-1905), which was on view in the original exhibition and is also part of the current one, caused a genuine outcry.

In each of those four American cities where it was held, the 1912 “Scandinavian Art Exhibition”  drew some of the largest audiences of any art exhibition up to that time. Although it was eclipsed just two months after it closed by the arrival of the even more radical Armory Show, the ASF-organized exhibition and its reception constitute a significant chapter in the history of art and culture in America.

The current “ Luminous Modernism” exhibition features 20 of the same artists and eight of the same works that were originally included in the 1912 exhibition, providing a rich picture of that earlier presentation and highlighting the unique qualities that visitors found so compelling about it one hundred years ago. The current exhibition has been expanded in scope to encompass all five Nordic countries, including Finland and Iceland, illustrating the full range of artistic expression throughout the region during this period.

Like the region itself, Scandinavia has a unique sensibility, not just in painting, but in all the arts. Perched as it is at the northern edge of the continent, it is of Europe—but is also its own place. In 1912, there were only three Scandinavian nation-states, Denmark, Sweden and Norway. Finland was part of Russia and was not yet a nation, while Iceland still belonged to Denmark. Several of the forty-eight paintings in the current exhibit embody the new nationalism that was sweeping northern Europe, as countries struggled to create their own unique sets of social structures, national values, languages, literature and art. Separate and yet a part of Europe, these Scandinavian paintings all reflect the major artistic trends that were sweeping the rest of the continent, Realism, Naturalism, Impressionism, Expressionism and Symbolism among them.  The new additions speak to the national yearnings that playwrights, poets, novelists and painters expressed at the time. One haunting painting, “Hvita” by Iceland’s Thorarinn Thorlaksson, dating from 1903, shows an Icelandic pony grazing by a fjiord. It is Iceland personified, a country that was waiting to be born in 1912 and one that has fully achieved its unique identity in 2012.

A country’s geography always informs its art. These works from Scandinavia demonstrate this truism strongly. Many show fields of ice and snow, native pines, birches and beeches, while others are filled with subdued northern light. The elegant interiors of the Danish master, Vilhelm Hammershoi, perfectly reflect the subdued light of Denmark, while his painting  ‘Landscape from Virum near Frederiksdal: Summer” captures the flat, sweeping fields, clustered farmsteads and windmills of his native  country. Even the brightest of Scandinavian landscapes, such as the Norwegian Harald Sohlberg’s “Flower Meadow in the North” and “Church with Cloud” by Sweden’s Prince Eugen, are softly hued. There is no sun-drenched, dazzling Provence in the North.

Patricia G. Berman, along with a team of scholars in the field of Scandinavian art, curated the current exhibition.  She notes in the catalog, “Perhaps because of their marginal place in European culture, and their peripheral location on the European map, the Scandinavian nations were often imputed with an uncorrupted innocence….” But, like the plays of Ibsen and Strindberg, these paintings reflect a much darker, more complex heritage, a sensibility that, like “Luminous Modernism,”  demands a close and careful look.

(The exhibition brings together important works by Nordic artists who embraced and pioneered the transformative aesthetic innovations that swept the European continent during late 19th- and early 20th-centuries. It remains at New York’s Scandinavia House at 58 Park Avenue, through February 11, 2012.Check out www.amscan.org)

To read the entire article, and view all the photos, please view the Art of the Times winter – spring 2012 issue as a PDF above.