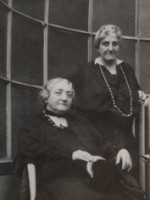 A terrific exhibition at the Jewish Museum shows what daring taste, adventurous minds and truly deep pockets can do.

Matisse called them his “Baltimore ladies,” the Cone sisters, whose unerring eye for the next big thing, along with their endless enthusiasm  and enormous wealth, enabled them to amass one of the greatest collections of early Impressionist art in existence. Claribel (1864-1929) and Etta (1870-1949) Cone, were two of twelve children of German emigrants.  Their father was a successful wholesale grocer, who moved the family from Tennessee to Baltimore.  The two eldest brothers moved to North Carolina, and began Cone Industries, one of the country’s most successful textile firms. They made denim for Levi Strauss, the work clothes of the nation, and the fabric for the country’s uniforms in World War I. This family wealth eventually enabled Claribel and Etta to establish their spectacular art collection, and to shop the world with their instinctive good taste.

Claribel was one of only a handful of women physicians in the country, a pathologist, researcher and teacher. Etta was possessed of more modest ambitions; she was the family caretaker and an early lover of the French language and the arts.

The sisters were retro in their dress, hair-do’s and demeanor. And they took being shopaholics to new levels, often reserving an extra seat at the opera for the day’s purchases.  Claribel’s Saturday evening gatherings included the writers and cultural movers and shakers on the Baltimore scene. Notable among these were brother and sister Gertrude and Leo Stein, transplants to Baltimore from Oakland, California. The Steins reciprocated years later by establishing their notorious salon in Paris.

In 1898, after the death of their father, Etta’s eldest brother Moses gave her $ 300 to spiff up the family apartment. Instead of the expected drapes and carpeting, she splurged on paintings, five charming works by the American Impressionist Theodore Robinson. These five paintings, purchased at the estate sale of the artist in New York, were the genesis of one of the most cohesive and important art collections in existence.

Etta was the first sister to travel to Europe, in 1901. She and her traveling companions were met upon disembarking in Naples by their friend, Leo Stein.  He was both guide and mentor, as he led her through the churches and museums of Italy, where she was blown away by the masterpieces she saw. She traveled through other countries and finally to Paris, where Leo and Gertrude Stein were living. There, she feasted on still more art, especially Japanese art, which was all the rage in Paris.  Claribel began traveling with Etta, and they made Paris their base away from home. They shopped and shopped and then they shopped some more. Textiles and prints, pottery, gifts and gloves, and also spent hours exploring the museums. The Cone sister were also avid participants in the Stein’s lively, bohemian salons, meeting such luminaries as composer Eric Satie, the poet Guillaume Appollinaire and artists Picasso and Matisse.

Sometimes, the synergy between artist and collector becomes a collaboration in itself, an ongoing exchange of tastes and ideas that results in art of absolute originality. Such was the relationship between the Cone sisters and Henri Matisse. In 1905, along with the Steins, sisters attended the infamous “Salon d’Automne,” the edgy venue for truly radical, outsider art. It was art like art had never been before, wild and untamed, unfettered by academics, convention or tradition. They found what they saw incomprehensible, without standards by which to judge or understand it. But they bought their first Matisse, the controversial “Woman with a Hat.” And after that, they never looked back.

Soon after, Gertrude Stein took them to visit the studio of a young, wild and impoverished artist named Pablo Picasso. They purchased a few drawings. Eventually, they owned more than one hundred examples of his works.

They were fearless in visiting studios, and buying work that was beyond the conventional pale. Along with works by Matisse and Picasso, they bought Renoirs and Cezannes, Monets, Pissarros, Sisleys and van Goghs, Degas, Rodins and Derains.

They filled their Baltimore apartment not just with avant-garde paintings, but also with a king’s ransom of textiles, rugs, shawls and tapestries, laces, linens and velvets. They traveled and shopped the world, bringing it all back home, antiquities and religious objects, jewels, porcelains and metalwork, an eclectic mix of whatever tickled their fancy. As usual, money was no object.

Claribel died suddenly in 1929, leaving Etta bereft. In 1930, Henri Matisse visited Etta in Baltimore. Realizing that someday, the Cone collection would enter the public domain, together they made sure that many of his finest works were included. After Claribel’s death, Etta continued to collect, more Matisse and Picasso, Gauguin, Morisot, Braque and Modigliani.

Upon Etta’s death in 1949, the collection was over 3000 pieces, all bequeathed to their hometown establishment, the Baltimore Museum of Art. The collection includes over one hundred Picassos and 500 works by Henri Matisse, considered one of the finest and largest collections in the world.  The painter himself noted, “It took a lot of gall to paint these things, but it took much more to buy them.”

To us today, the collection seems almost conventional. Almost all the works collected by the Cone sisters were figurative, and to our 21st century eyes, seem mainstream and traditional. But when they started collecting, what they did was radical and brave in the extreme. And they have left us with a truly priceless legacy.

(The exhibit at the Jewish Museum has 50 exquisite pieces, carefully chosen from the Baltimore trove. It is on until September 25.  Next year, from June-September, the exhibit will be on view in Vancouver in Canada.  There is a delightful catalogue, written by Karen Levitov, who curated the exhibit, co-published by the Jewish Museum and Yale University Press. 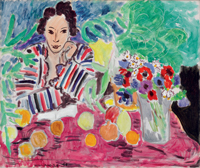